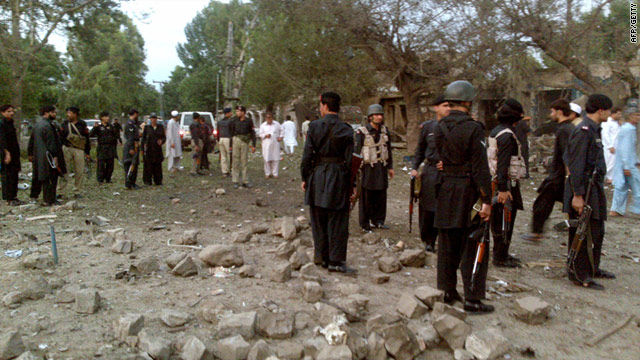 Pakistani security personnel gather at the site of a suicide car bomb attack in the town of Hangu on Thursday.
STORY HIGHLIGHTS
RELATED TOPICS

Islamabad, Pakistan (CNN) -- The Pakistan Taliban claimed responsibility Thursday for a suicide bombing outside a police station in northwestern Pakistan that left at least 25 people dead, saying it was part of a series of attacks to avenge the killing of al Qaeda leader Osama bin Laden.

In a phone call to CNN, Taliban spokesman Ihsan Ullah Ihsan said Pakistani security forces and government officials are killing innocent mujahedeen and "we will take revenge from them by killing their loved ones, as we did in Thursday's attack."

At least 56 people were injured in the explosion, which happened near local law-enforcement and court buildings, said Abdul Rasheed, the police chief of Hangu district. The district is in Khyber Pakhtunkhwa province, not far from the border with Afghanistan.

The suicide bomber blew himself up in a car, said Masood Khan Afridi, a senior police official in Hangu.

Pakistani Prime Minister Syed Yusuf Raza Gilani "strongly condemned" the attack, according to a statement from his office.

"The prime minister, while reiterating the government's resolve to fight the terrorist elements until their complete elimination, said that those targeting the innocent people are in fact the enemies of humanity," the statement said. "They... have no regard for the human life or creed as they are following their own nefarious agenda."

Gilani called on the population to unify and "defeat these anti-state elements," the statement said, adding that the prime minister also directed law enforcement to mount a rigorous investigation into the attack.

A team of U.S. Navy SEALs raided bin Laden's compound and killed him May 2 in Abbottabad, Pakistan. Several al Qaeda-affiliated groups have vowed to launch attacks in retaliation.