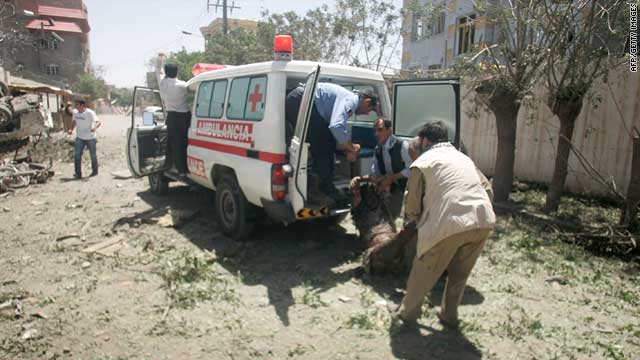 Afghan hospital workers carry a wounded man at the site of the attack in Herat, Afghanistan, on Monday.
STORY HIGHLIGHTS
RELATED TOPICS

The attacks occurred within minutes of each other just blocks apart in Herat, an area where U.S. military officials have hinted American troops would be withdrawn by July because it has been largely free of violence.

The bombers targeted the Ministry of Transport in central Herat and a compound that houses an Italian Provincial Reconstruction Team (PRT) -- an outreach unit made up of civilian affairs and aid workers, said police commander Abdul Rauf Ahmadi.

There was no immediate claim of responsibility for the attack on the transport ministry.

The first explosion occurred when a suicide bomber on foot detonated an explosive vest near the Ministry of Transport, a busy section of central Herat, he said. Witnesses say there were civilian casualties, though it was not immediately clear whether anybody was killed in that blast.

The second attack came minutes later when a suicide bomber, driving a white Toyota Corolla, got through the first gate at the PRT compound by telling guards he was carrying cement to the building. At the second gate, the suicide bomber was identified by police, and he detonated his explosive device, said Herat police spokesman Noorkhan Nikzad.

The bomber was among the wounded taken to the hospital, where he died, Nikzad said.

After the bombing, gunmen launched an assault at the compound, police commander Ahmadi said.

Afghan and NATO-led forces battled gunmen, who had taken up position inside a building next to the compound, Harif Taib, a government official in Herat, told CNN.

Police commander Ahmadi said the situation was under police control and the gunfight had ended, though witnesses said gunfire could still be heard hours after the initial explosions coming from direction of the compound.

"We can reassure the families that among the dead, there are no Italian soldiers," Undersecretary of Defense Guido Crosetto told Rai1 radio.

The blasts rattled Afghans in Herat, which has been considered one of the country's success stories with the NATO-led International Security Assistance Force turning some of the primary security for the area over to Afghans.

"It's a big surprise," said Nemaqullah Rahimi, 22. "We've haven't had a bombing in six months."

Rahimi, a driver-for-hire in Herat, said his girlfriend's uncle was among the wounded in the blast near the transport ministry.

The number-two American commander in Afghanistan, Lt. Gen. David Rodriguez, hinted in a CNN interview in February that Herat may be one location U.S. forces could begin to withdraw from as part of President Barack Obama's self-imposed deadline to begin bringing home troops by July 2011.

The attacks come the same day that Army Gen. David Petraeus, commander of NATO-led troops in Afghanistan, joined two other generals in offering "sincere apologies" for an airstrike that killed nine civilians in southern Afghanistan.

Maj. Gen. John Toolan, the head of ISAF command in southwest Afghanistan, said his apology was being made "on behalf of the coalition" and its top leaders, including Petraeus.

Earlier, Afghan officials said that Saturday's attack in Helmand province killed a dozen children and two women. There was no immediate explanation for the disparity between this figure and the toll of nine civilians killed offered Sunday by Toolan, who also noted that a U.S. Marine was killed immediately before the strike.

In the statement, Toolan pleaded with Afghans to not only forgive, but also to work with coalition forces in hopes of bolstering their security.

"I offer our heartfelt apologies to the families and friends of those killed," Toolan said in a statement. "I ask that the Afghan people continue to trust and assist their security forces, so that together we can stop the senseless killing brought upon us by an enemy who wants to exploit the Afghan people through fear and violence.