Vietnam on alert for smugglers after deadly snakes found on train

By Camilla Fuhr Nilsson, For CNN 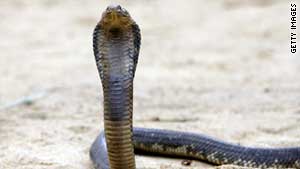 (CNN) -- Vietnamese authorities are on alert for animal smugglers after four bags of deadly snakes were found on a train from Ho Chi Minh City to Hanoi, according to local press reports.

The bags contained an undetermined number of snakes including some king cobras, the on-line news service VnExpress reported.

A guard and a conductor found them while inspecting the train when it made a stop at Quang Ngai railway station on Thursday, the website reported. The guard and conductor were not injured.

Passengers panicked when they heard about the snakes, VnExpress said.

The snakes, which are protected by law in Vietnam, were handed over to the Quang Ngai forest protection agency on Friday and released into the wild.

Some of the snakes weighed more than one kilogram (2.2 pounds) each, said Nguyen Van Han, chief of the forest protection unit.

Officials in Quang Ngai will increase patrols and inspection the North-South railway, roads and restaurants to prevent the smuggling of wild animals, according toTuoitrenews, an online publication of a Vietnamese newspaper.

The king cobra is the world's longest venomous snake with a length up to 13 feet (4 meters) according to New York's Bronx Zoo, which had an Egyptian cobra escape earlier this year. That cobra was found in the zoo's reptile house a week after it escaped from its enclosure.