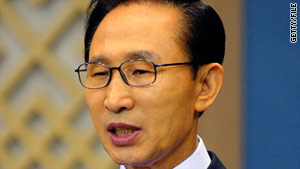 Seoul, South Korea (CNN) -- South Korea said Tuesday it regrets North Korea's announcement that it will cut all ties with its neighbor.

North Korea's National Defence Commission issued a statement Monday saying it "will never deal with traitor Lee Myung-bak and his clan" referring to the South Korean president and accusing Seoul of "psychological warfare."

The North said it would launch an "all-out offensive" against Seoul for allowing anti-Pyongyang propaganda to be sent by human rights groups and some politicians in balloons across the border.

Pyongyang has often made such threats in the past through its state-owned news agency KCNA.

"We regard it as disappointing that North Korea came out with quite a strong statement yesterday," said South Korean Foreign Ministry spokesman Cho Byung-jae on Tuesday. "We think it is time for North Korea to be serious about dialogue and show transformed efforts."

Lee had invited North Korea to next year's nuclear security summit in Berlin on the condition Pyongyang renounced nuclear weapons.

Tensions have been high on the Korean peninsula since the sinking in March 2010 of the South Korean warship, the Cheonan -- which an international investigation blamed on the North -- and the shelling in November of Yeongpyeong Island, which killed two South Korean marines and two civilians.