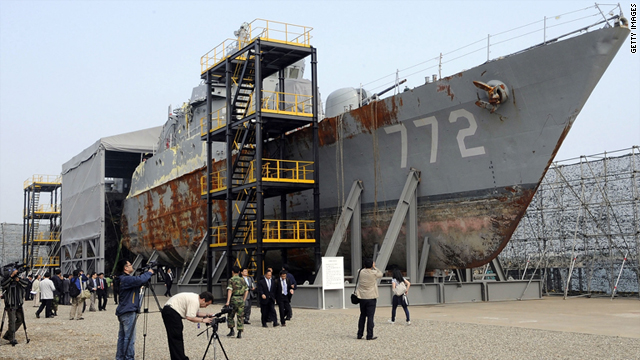 The wreckage of the naval vessel Cheonan pictured on May 20, 2010 in Pyeongtaek, South Korea.
STORY HIGHLIGHTS
RELATED TOPICS

The meeting was to persuade North Korea to apologize for the sinking of a South Korean warship Cheonan 15 months ago and the shelling of Yeongpyong Island last November, Unification minister Hyun in-Taek told parliament.

Fifty South Koreans were killed in those attacks.

However, North Korean officials said South Korea had asked for a series of summits at the May 9 secret meeting.

However, the North Korean National Defence Commission said South Korea had asked for a series of summits at the May 9 secret meeting.

It also wanted to hold the first round of summit talks in June at Panmunjom, a truce village on the border where meetings between north and south take place, and a second round of talks during the nuclear security summit in Berlin in March next year, KCNA reported.

Pyongyang says it declined as the South had asked it to apologize for last year's attacks.

Pyongyang denies responsibility for the sinking of the warship. The NDC also claimed South Korean officials had begged for a summit and offered bribes.

In a statement, the South Korean unification ministry expressed regret at the North's revelation, saying "It is not worthy to respond to unilateral claims that distort our true intentions."

State Department spokesman Mark Toner said in a news briefing Wednesday that he did not see it as a ratcheting up of tensions, but "we've been consistent in saying North Korea needs to improve North-South relations before we move forward, ceasing provocative actions."