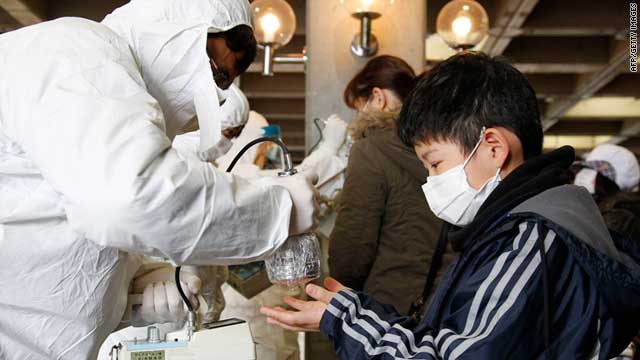 An official scans an evacuated boy to check radiation levels in Koriyama city in Fukushima prefecture on March 16, 2011.
STORY HIGHLIGHTS

Tokyo (CNN) -- Japan released new details Tuesday of the battle to contain the Fukushima Daiichi nuclear accident, after disclosing that the crippled power plant spewed more than twice as much radioactivity as originally estimated.

The release was already bad enough to make Fukushima Daiichi the worst nuclear accident in a quarter-century. The levels disclosed Monday are still a fraction of the amount released in the 1986 Chernobyl disaster, but are closer to some outside estimates.

Radiation levels at one point 20 km northwest of the plant were nearly 1,000 times normal within four days of the accident, far beyond the threshold for long-term health effects, according to a report Japan submitted to the International Atomic Energy Agency on Tuesday. The report found that projections from a radiation-monitoring system should have been released to the public earlier, even though it hard data was lacking at the time.

In April, when it declared Fukushima Daiichi a top-level event on the international scale that ranks nuclear disasters, Japan's Nuclear and Industrial Safety originally estimated that the radioactive release from the plant at a minimum of 370,000 terebequerels. A terabecquerel is equal to one trillion becquerels, a unit of radioactivity equal to one nuclear decay per second.

Japan's Emergency Response Center raised that estimate this week to 770,000 terabecquerels from March 11 to March 16, the first five days after the accident. At Chernobyl, in the former Soviet republic of Ukraine, the radioactive release amounted to 5.2 million terabecquerels.

The announcement will not change plans for how to stabilize the Fukushima Daiichi plant, the Emergency Response Center said. The plant's owner, the Tokyo Electric Power Company, hopes to wind down the nearly 3-month-old crisis sometime between October and January.

It is the latest of a several revisions the Japanese agencies have made regarding the extent of the damage at the nuclear plant, where all three operating reactors suffered meltdowns after the earthquake and tsunami that ravaged northern Japan on March 11. The Fukushima Daiichi accident compounded an already massive natural disaster, forcing more than 100,000 people from their homes around the plant and as far as 40 kilometers (25 miles) downwind for a still-unknown period.

Japan provided its most detailed accounting of the accident to date in its new report to the IAEA, the U.N. nuclear watchdog agency. It describes a chaotic situation in the hours following the quake, as engineers struggled to determine how badly the reactors were damaged and Japanese officials struggled to organize their response.

While defending much of the effort, the report noted that authorities had insufficient training to work with other agencies taking part.

"For example, it took time to communicate between the emergency office inside of the power station, the Nuclear Emergency Response Headquarters and the local headquarters, and also to build collaborative structure with Self Defense Force, police, fire authorities and other organizations which played important roles in responding to the accident," Tuesday's report states. "Adequate training could have prevented these problems in advance."

An off-site command center 5 km (3 miles) from the plant was unable to be used for days due to high radiation levels, damaged communications gear and shortages of food and fuel, the government reported. An alternative site -- the city hall in Minami Soma, on the outskirts of the evacuation zone -- was already being used to manage earthquake and tsunami relief efforts. A local emergency management center had to be moved to the city of Fukushima on March 15.

Tokyo Electric now estimates that the core of the No. 1 reactor began to suffer damage within an hour of the tsunami, which knocked out coolant systems at the plant. Within 15 hours, fuel had melted and had begun to damage the heavy steel of the reactor pressure vessel, which houses the core, according to the report.

A hydrogen explosion -- a symptom of core damage -- blew the roof off the No. 1 reactor building on March 12, and another one blew apart the No. 3 reactor housing two days later. Those blasts damaged the door to the quake-proof shelter on the plant grounds, "as there were no particular protection equipment installed in the building against such an eventuality, the inhalation of radioactive materials by workers occurred," the report states.

And a radiation-monitoring system designed to predict the spread of radioactive particles was "not fully utilized" because of a lack of information, the report states. The system, known as SPEEDI, is run by the country's science ministry and should have been used even though hard data was lacking, the document concludes.

"Although the results generated by SPEEDI are now being disclosed, it should have been done so from the initial stage," the report states.