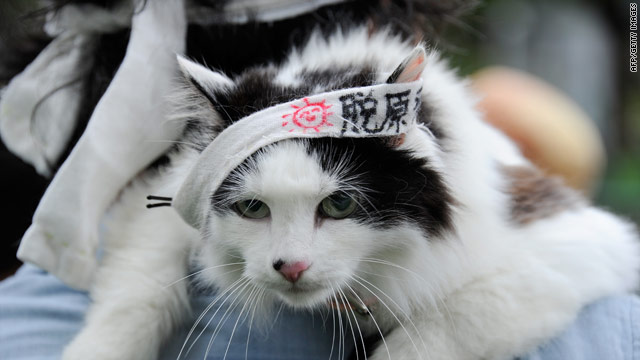 A man holds his cat clad in a headband with anti-nuclear slogans in Tokyo on June 11, 2011.
STORY HIGHLIGHTS
RELATED TOPICS

(CNN) -- Japanese protesters took to the streets Saturday to demand safer energy as the nation marked the three-month anniversary of an earthquake and tsunami that sparked the worst nuclear crisis in 25 years.

The massive quake on March 11 triggered a nuclear crisis at the Fukushima Daiichi plant, forcing the evacuation of thousands. Months later, crews are still working to control radioactive emissions.

"We need electricity, but we cannot put lives at risk," said Kentaro Morisawa, a railway worker who took part in the Tokyo protest.

"We have the responsibility to protect our children's lives as much as our lives. Safer energy, such as fuel and water, is what we need today.

"Because we are letting radioactive material leak into the environment, we are getting a bad reputation from overseas," protester Mamoru Matsuda said.

"So we need to end this Fukushima crisis as soon as possible."

Some of the protesters gathered near the headquarters the Tokyo Electric Power Co., which operates the nuclear plant.

The protests comes three months into the crisis, which is the worst nuclear accident since the 1986 Chernobyl disaster.

One of three operating reactors at the plant melted down after the March earthquake and tsunami, and others suffered extensive damage to their radioactive cores.

The resulting contamination has forced authorities to evacuate more than 100,000 people from towns surrounding the plant.

In addition, restrictions on various agricultural and fisheries products have devastated Japanese farmers and fishermen since the disaster started, though some of those bans have been lifted in recent weeks.

The protests are the latest show of discontent for embattled Prime Minister Naoto Kan, who survived a no-confidence vote in this month.