From Oseah Philemon, For CNN 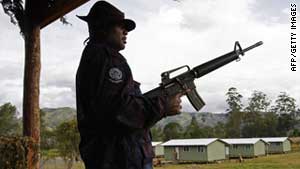 "To give credit to the acting prime minister, he has been very cooperative with police so far," said Anthony Wagambie, the police commissioner.

The acting leader notified authorities when a guard discovered the body at his home Monday, police said.

His son, Theo Abal, was detained for questioning in the capital of Port Moresby.

The man in his 20s is the only suspect in the killing of the woman, whose body was found next to a long kitchen knife, according to police.

"We are now waiting for positive identification of the female victim before we charge Theo," the commissioner said in a statement. "We appeal to anybody who might know her to come to the Boroko police station and help in the identification process."

Opposition members urged the acting prime minister to resign to avoid interfering in the case.