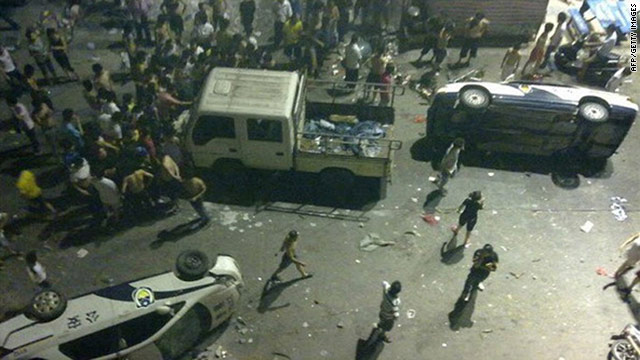 Xintang, China (CNN) -- The authorities here are obviously nervous. My crew and I are sitting in a local government building being questioned by six propaganda officials.

One of them is scribbling down our credentials in a worn pocket-sized notebook. My producer, Steven Jiang, is talking non-stop to one officer who looks especially nonplussed.

We traveled to the manufacturing town of Xintang to investigate why thousands of migrant workers suddenly took to the streets just a week ago.

We knew the unrest was triggered by what appeared to be a minor event -- a pregnant migrant worker and her husband got in a scuffle with city officials and she ended up falling on the ground.

However, the ferocity by which this dispute exploded in a massive conflagration, pitting thousands of enraged workers against hundreds of riot police, took many by surprise.

The unrest seems to belie the image of China as a bustling economy going from strength to strength, enriching the lives of millions across the country, especially in the industrial south. But the problem is many people feel they are not getting their fair share of the rapid growth.

Since we arrived, the streets look relatively calm here. People are out shopping. Cars are on the roads.

However, the frustrations the workers feel is palpable.

We visited a job center and, for the first time since I started reporting in China years ago, workers approached us unfazed by our cameras. They were unafraid to vent their grievances to foreign TV journalists even as the police looked on.

The workers complained of the lack of jobs, unscrupulous bosses hoarding back pay, and corrupt local officials.

In China, with its one-party government, getting people to speak openly about the authorities is challenging and extremely rare, especially with the cameras rolling. It struck me these workers must feel no one else is listening.

Economic uncertainty is the root cause of China's wave of discontent. However, unlike in the Middle East, people here are not calling for a new government. What they want is a way to right wrongs and not to be forgotten.

We had been filming for several hours before the propaganda officials stopped us at a jeans factory to take us in for questioning. They told us Xintang had just been declared a special zone requiring additional permissions above and beyond our press credentials to report here.

We apply for new permits but, not surprisingly, they aren't granted and we are told we have to leave.

Migrant workers had told us more police patrol the town at night. Unfortunately, we won't be able to see that for ourselves.