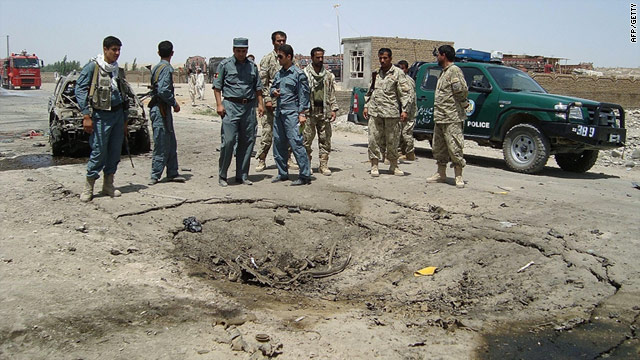 The attack came a day after Afghan President Hamid Karzai said the United States was involved in peace talks with the Taliban. U.S. officials have downplayed Karzai's statements, saying there had been contact but no discussions substantial enough to be considered negotiations.

"I would say that these contacts are very preliminary at this point," Defense Secretary Robert Gates said in an interview broadcast Sunday on CNN's "State of the Union."

The State Department is carrying out the contacts with the Taliban, which have been going on for "a few weeks, maybe," Gates said. He added that the Taliban must come under further military pressure from the U.S.-led international military force and Afghan government forces before any substantive talks will occur.

"My own view is that real reconciliation talks are not likely to be able to make any substantive headway until at least this winter," Gates said in the interview conducted on Saturday. "I think that the Taliban have to feel themselves under military pressure, and begin to believe that they can't win before they're willing to have a serious conversation."

News of the talks has done little to stem attacks in Afghanistan.

On Sunday, a suicide bomber detonated a car full of explosives just as a convoy driven by German soldiers passed, said the governor's spokesman, Mahbobellah Saidi.

The convoy was attacked on the road leading to the airport in Kunduz City, the provincial capital, the Ministry of Interior said in a written statement.

Two German soldiers sustained minor injuries, according to the German military. The target of the attack was unclear. Two armored vehicles were damaged and are in the process of being recovered, a military spokesman said.

It was not immediately clear whether there were NATO casualties, though one of the convoy vehicles was damaged, Saidi said.

But the Taliban claimed to have killed many soldiers in the attack.

"The troops were targeted accurately, according to the plan, and many of the soldier have been killed as a result of the attack," Taliban spokesman Zabiullah Mojahed told CNN by telephone from an unknown location.

CNN can not independently verify the Taliban claim nor Saidi's account.

ISAF has not released the names of those killed, saying its policy is to defer casualty identification procedures to national authorities.