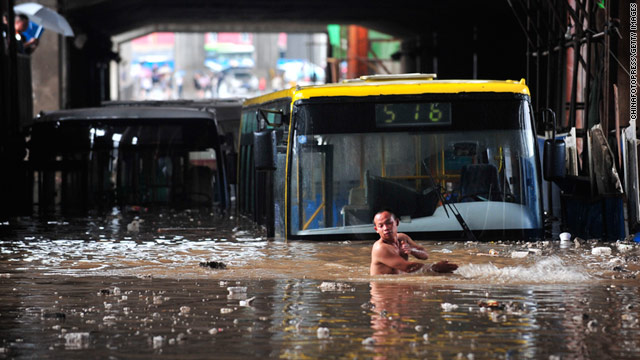 Vehicles trapped in a flooded street after heavy rainfall in the Chinese province of Hubei on Saturday.
STORY HIGHLIGHTS

Authorities evacuated more than 57,000 people in Hubei, Hunan and Jiangxi provinces as downpours hit the region, the state-run Xinhua news agency reported. The heavy rains have caused 730 million yuan ($113 million) in economic losses in Hubei province, where more than 2,100 homes were destroyed and crops were damaged by flood waters, Xinhua said.

In Zhejiang province, at least 171,000 hectares (422,550 acres) of crops were destroyed by flooding, and nearly 1,000 businesses were shut down, Xinhua reported, citing data from local officials. The rains have caused 4.96 billion yuan ($752 million) in economic losses there, the news agency said.

Hubei province -- where the Three Gorges Dam is located -- saw significant flooding, according to Xinhua. And the rains caused water levels in dozens of reservoirs in neighboring Hunan province "to exceed alarming levels," the news agency said.

At least 25 people were killed last week as flooding forced the evacuation of about 671,200 people in 10 provinces and municipalities in the middle and lower reaches of the Yangtze River, according to China's Ministry of Civil Affairs.

It comes a month after the Chinese government acknowledged that the Three Gorges Dam -- the world's largest hydropower plant -- was having "urgent problems" and warned of environmental, construction and migration "disasters."