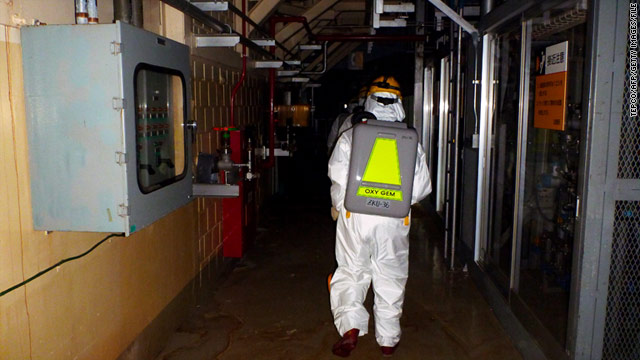 Workers enter the No. 2 reactor at TEPCO's Fukushima Daiichi nuclar power plant in Japan in May.
STORY HIGHLIGHTS

Tokyo (CNN) -- Workers at the crippled Fukushima Daiichi nuclear power plant have been cleared to open the No. 2 reactor building's airlock to ease sauna-like conditions inside, the plant's owner said Sunday.

The Tokyo Electric Power Co. said it planned to open the heavy double doors slowly overnight, taking about eight hours to complete the process to avoid disturbing contaminated dust inside the containment building. The company has been trying to filter radioactive particles out of the air inside the building for several days, and Japan's Nuclear and Industrial Safety Agency approved Friday plans to open the airlock, Tokyo Electric announced.

The reactor is one of three at Fukushima Daiichi that suffered meltdowns after the March 11 earthquake and tsunami that devastated northern Japan. The tsunami swamped the plant and knocked out cooling systems that kept the three operating reactors from overheating, leading to the worst nuclear accident since Chernobyl.

Japanese authorities used robot probes to peer into the reactor housings in April, finding temperatures up to 41 degrees Celsius (106 F) and humidity ranging from 94% to 99% inside unit 2. Engineers have long suspected that the reactor was leaking a large percentage of the hundreds of tons of water being poured into it every day to keep it cool following the accident.

But radiation levels inside were far lower than those recorded at units 1 and 3, holding open the possibility that workers could get inside and try to repair some of the damage if the humidity and temperature could be controlled.

Japan's nuclear safety agency has estimated that tens of thousands of tons of contaminated water has leaked out of the three reactors since the disaster, collecting in the turbine plant and utility tunnels around the reactors since March 11. Decontaminating and storing that water is a key step in Tokyo Electric's plans to wind down the ongoing crisis by January -- but those plans suffered a setback over the weekend, when a newly installed treatment system registered higher-than-expected radiation levels.

The latest developments come as the International Atomic Energy Agency prepares to open a four-day conference on nuclear safety and the Fukushima accident in Vienna, Austria, on Monday. The conference is aimed at drawing lessons from the Fukushima disaster, the agency says.

Though no deaths have been attributed to the accident, the resulting contamination has forced authorities to evacuate more than 100,000 people from towns surrounding the plant. In addition, restrictions on various agricultural and fisheries products have devastated Japanese farmers and fishers since the crisis began.

In a June 7 report to the IAEA, the U.N. nuclear watchdog agency, the Japanese government described a chaotic situation in the hours following the quake, as the company and the government struggled to respond to the disaster.