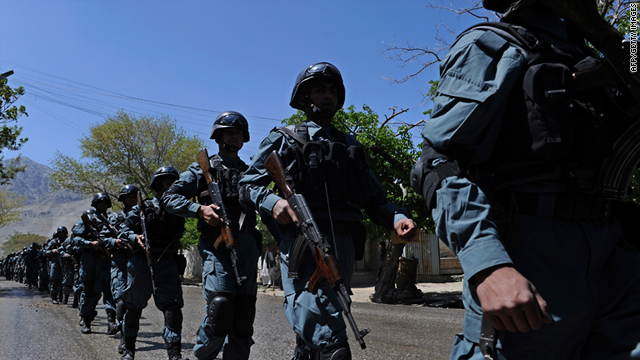 Kabul, Afghanistan (CNN) -- At least two people were killed Tuesday when a suicide bomber apparently targeting a provincial governor in Afghanistan blew himself up, officials said.

The attack occurred in Charikar, the seat of Parwan province in the country's northeastern region -- a relatively stable area compared to other flash points in the war-wracked nation.

Authorities were investigating the attack, which took place around 11 a.m. near the gate of the governor's compound.

The attacker set off the bomb near the governor's car. The suicide bomber hit one vehicle but the governor was in another.

A child was killed, a local police official said. A woman died, according to Afghan Interior Ministry, which condemned the assault.

Two civilians also were wounded, the ministry said. Parwan Police Chief Sher Ahmad said a guard for the governor was injured in the attack.

In another incident, an international service member died in a bombing in southern Afghanistan on Tuesday, NATO's International Security Assistance Force said.

Also, the Interior Ministry said it confiscated many weapons and explosives over the last 24 hours in locations across the country.

They are a "significant amount of munitions that could have been used in subversive attacks, roadside mines and different explosive devices that could also lead to civilian causalities," the ministry said.