Tropical storm in Philippines kills 11, forces 40,000 out of homes 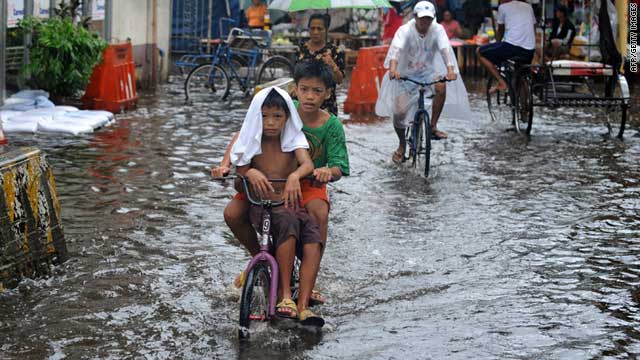 Children pedal their bicycle down a flooded street after heavy rains in Valenzuela City, north of Manila on June 23, 2011.
STORY HIGHLIGHTS
RELATED TOPICS

The storm has been menacing the Philippines since Tuesday, when 11 fishermen went missing along the coast of Luzon, according to the National Disaster Risk Reduction and Management Council.

The storm was forecasted to move Saturday toward Basco, Batanes, the smallest of the Philippine provinces, the council said. By Sunday, the storm was expected to be 370 kilometers (229.9 miles) west northwest of Okinawa, Japan, the agency said.

Flash floods were reported in a number of Philippine communities, including Ligao City where one woman was reportedly washed away by floodwaters, the council said in a statement posted on its website.

A landslide struck in a rural area of Olongapo City, forcing the evacuation of three families, the council said.

Thirty international flights as well as 26 domestic flights were canceled because of the storm, the Civil Aviation Authority said.

About 32,000 families in 17 cities were displaced by the storm, the emergency management agency said. Another 10,143 families have been evacuated from their homes in advance of anticipated flooding, the agency said.