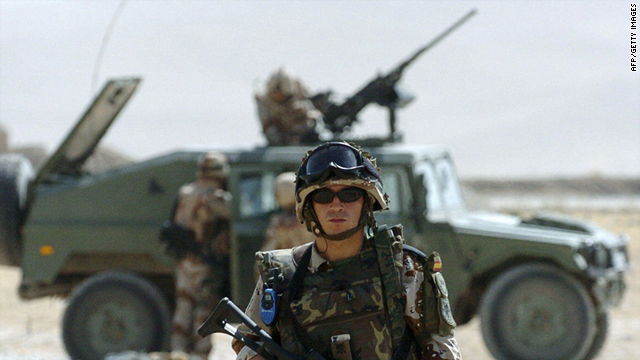 (CNN) -- Two Spanish soldiers were among at least six coalition troops killed over the weekend in bombings and attacks around Afghanistan, according to military officials.

One member of the International Security Assistance Force, the NATO-led coalition that is fighting al Qaeda, Taliban and other insurgent forces in the embattled southwest Asian nation, was killed Saturday in an attack in southern Afghanistan.

The Spanish troops were conducting a reconnaissance patrol in northern Afghanistan, about 20 kilometers (12 miles) north of Qala-i-Naw, when their armored vehicle hit an improvised explosive device, according to a news release from Spain's defense ministry.

Sgt. Manuel Argudin Perrino and soldier Niryeth Pineda Marin were killed in the blast. Three other troops were flown by helicopter to a nearby hospital for treatment. Ruben Velazquez suffered various contusions, Jhony Alirio Herrera Trejos had a broken leg and probable broken arm, and Roi Villa Souto a fractured leg.

The coalition announced the developments in news releases without additional information, including the victims' nationalities or the circumstances of their deaths.

About 271 coalition troops -- most of them from the United States -- have died this year in Afghanistan, with 2,542 killed since the military operation began nearly 10 years ago.