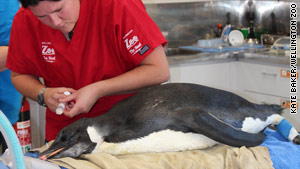 The penguin is shown during treatment at the Wellington Zoo for a belly full of sand.

(CNN) -- A young emperor penguin discovered thousands of kilometers away from its home might survive ingesting a bellyful of sand, New Zealand zoo officials said.

The penguin -- whose gender is unknown pending DNA test results due this week -- stunned passers-by when it showed up at a beach north of Wellington last week.

"This is only the second time an emperor penguin has been seen in New Zealand," said Kate Baker, spokeswoman for the Wellington Zoo, where the bird was taken for treatment.

Even more surprising was what the zoo found inside the penguin -- enough sand to fill its stomach to its esophagus.

"In Antarctica, they normally eat ice to cool down and to hydrate," Baker said. It's possible the bird mistook or tried to substitute the sand for snow or ice.

It's unclear why the bird apparently swam more than 3,000 kilometers (1,864 miles) from Antarctica.

New Zealanders have dubbed the penguin "Happy Feet," a reference to the 2006 animated movie about emperor penguins. But those at the Wellington Zoo are steering clear of giving the bird a name.

"We get very fond of our patients. If you start naming them, it's really hard if the worst were to happen," said Dr. Lisa Argilla, manager of veterinary science at Wellington Zoo. "We'll try to avoid (naming) until we're really happy he's going to make it."

The bird has undergone two stomach flushes, but getting all the sand out remains a challenge, Argilla said.

"Having sand in your stomach is very serious," she said. "It can cause a rupture, that's my main concern. ... I would assume the sand has abraded the stomach lining."

The emperor had a "rest day" from procedures Sunday and will undergo an endoscopy on Monday, Baker said.

The zoo currently has four little blue penguins, which are native in New Zealand, Baker said. All have been rehabilitated; one is missing an eye, and one is missing a flipper.

But taking care of an emperor penguin is an entirely different story. The bird's temporary quarters include air conditioning set as cold as possible and shaved ice to keep the emperor cool.

Argilla said the top priority is helping the bird recover. If all goes well, the Department of Conservation will decide where the penguin should go.

In the meantime, the bird has garnered widespread attention and sympathy.

"I think people have a real soft spot for penguins," Argilla said. "Everyone feels really sorry for him. He's just so lost."