Chinese activist Hu promises parents he will be 'careful' in future 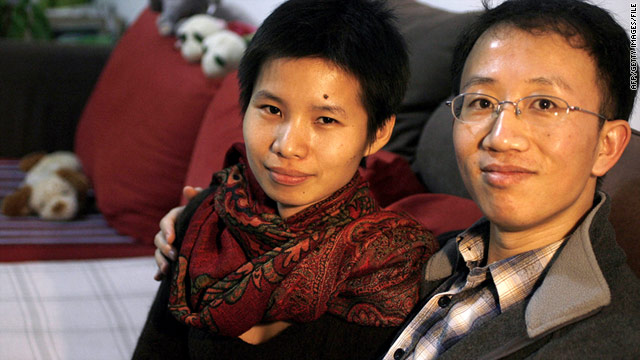 Activist Hu Jia and his wife, Zeng Jinyan, pose in their home on the outskirts of Beijing in 2007.
STORY HIGHLIGHTS

Beijing (CNN) -- Prominent human rights activist Hu Jia, who was released over the weekend after serving a 3 1/2-year sentence, is promising his parents he will be "careful" in the future.

In a phone call to CNN affiliate iCable News in Hong Kong on Sunday, Hu said his parents had asked him to not clash with the system.

"Once I saw my family, I understood how much I owe them, especially my parents, my wife and my kid. I realize I've done nothing for them. There is a Chinese saying that 'patriotism and filial piety don't go hand in hand,'" he said in the phone call.

"They told me to be a good citizen and don't clash with the system. This system is very brutal. It uses government's power to violate people's dignity. I can only tell my parents, I will be careful."

Hu, 37, denounced China's human rights record in a series of articles ahead of the 2008 Beijing Olympics and was later sentenced to 3.5 years in prison for "inciting to subvert state power."

He also has been active on AIDS issues in China.

In his phone call to iCable, Hu talked further about his parents and his responsibility toward them and others like them.

"My parents are very old. How many parents are like my parents? Others, too, are also in pain but not getting as much attention and help from you all as I did," he said. "These people are more isolated. I can only try my best to comfort my parents and comfort the others too."