China and Vietnam: a timeline of conflict 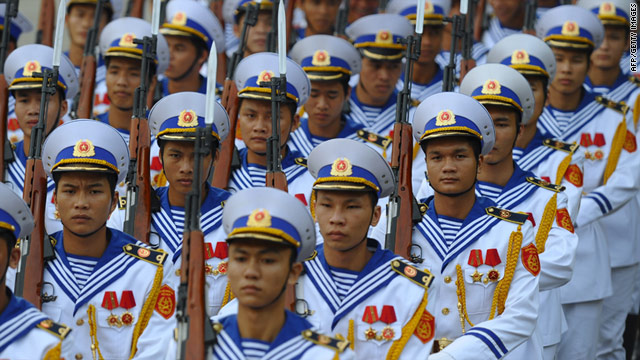 Sailors belonging to the Vietnamese navy march during a ceremony in 2010.
RELATED TOPICS

(CNN) -- Hanoi's embrace of one-time foe the U.S. and growing rancor with Vietnam War-era ally China may appear surprising, but the two nations share a long and complicated history of territorial disputes.

Vietnam and China, who established formal ties in 1950, have had border differences that trace back to the 1950's. These disputes were deferred while Beijing's southern neighbor was battling a civil war, and the U.S. entry into the conflict tied Northern Vietnam more closely to Beijing. As the Vietnam war wound down, however, territorial disputes began anew.

1973 -- Hanoi announces to Beijing its intentions to negotiate contracts with foreign firms for the exploration of oil in the Gulf of Tonkin, part of the South China Sea. The disputed islands in the South China Sea assume importance only after it is disclosed that they are near the potential sites of substantial offshore oil deposits.

1978 -- Vietnam's treatment of the Hoa people - an ethnic Chinese group - becomes an issue when Hanoi institutes a crackdown on the Chinese community because of its pervasive role in domestic commerce in the South and its alleged subversive activities in the North. Vietnam's actions force an unprecedented exodus of thousands of Hoa across the border into China.

November 1978 -- Sino-Vietnam relations worsen when the Soviet Union and Vietnam sign a Treaty of Friendship and Cooperation that calls for mutual assistance and consultation in the event of a security threat to either country.

February to March 1979 -- In the Sino-Vietnamese Border War, China launches the offensive in response to Vietnam's invasion and occupation of Cambodia, which ends the reign of the China-backed Khmer Rouge. This becomes China's largest military operation since the Korean War.

1985 -- Throughout most of 1985 and into the early months of 1986, Vietnam's border provinces are subject to intense artillery and mortar shelling. China issues vague threats to Vietnam of a "second lesson" over the stalemate with Cambodia.

1988 -- China and Vietnam fight a naval battle just off the Spratly Islands. 70 Vietnamese sailors are killed.

November 1991 -- China and Vietnam normalize relations after more than a decade of hostility.

December 2000 -- Vietnam and China sign two agreements to resolve a long-standing territorial dispute over the resource rich Gulf of Tonkin. The agreements demarcate territorial waters and exclusive economic zones, as well as outlining regulations for fisheries.

May 2003 -- The Vietnamese Foreign Ministry issues a "sovereignty" declaration on the Chinese ban on fishing in the South China Sea, claiming that Vietnam had undisputed "sovereignty" rights over the Paracel and Spratly islands.

May 25, 2011 -- A Vietnamese ship has its cables cut by Chinese patrol boats while conducting a underwater survey of the South China Sea.