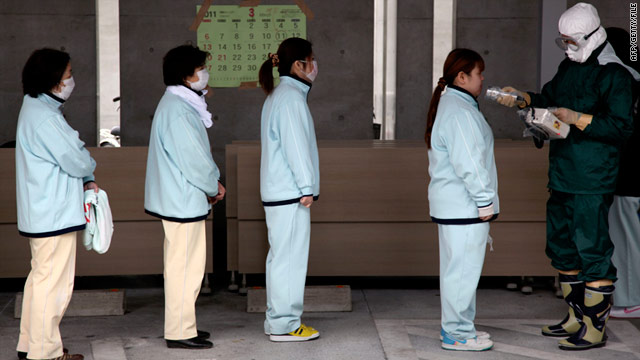 People line up for radiation screening in Fukushima prefecture on March 21.
STORY HIGHLIGHTS

(CNN) -- Japanese researchers have found radiation in all 15 people tested last month from the area near the crippled Fukushima Daiichi nuclear power plant.

Cesium was found in the participants, ranging from 4 to 77 years old, through two rounds of testing conducted by Nanao Kamada at the Research Institute for Radiation Biology and Medicine of Hiroshima University.

Kamada insisted that the cesium numbers are minute and do not represent a health threat.

The people tested lived in the towns of Iitate and Kawamata, located about 25 miles (40 kilometers) from the nuclear plant.

The participants were also tested for radioactive iodine, which was found in the urine of six Fukushima prefecture residents.

The urine samples from a 77-year-old man in the first round of tests indicated radioactivity as high as 3.2 millisieverts. However, no iodine was found from the urine of the same man in the second round of tests, ruling out the possibility of air contamination.

"The cause might be that they ate contaminated vegetables and mushrooms before the restrictions, not by inhaling contaminated air," Kamada said, referring to a large scale restriction on Fukushima produce following the incident at the plants on March 11.

The data indicated that accumulated external exposure was between 4.9 and 13.5 millisieverts for the two months after the accident -- a number which could exceed the government limit of 20 millisieverts per year if they continue living in the area.

"From the perspective of protecting human health from radiation, it is clear that they unfortunately cannot continue to live in their homes," Kamada said. About 7,500 people were evacuated from the communities by the end of May, although some folks continue to live in Iitate.

The first test was conducted May 5, while the second was conducted at the end of the month. The results were announced to the residents June 19.