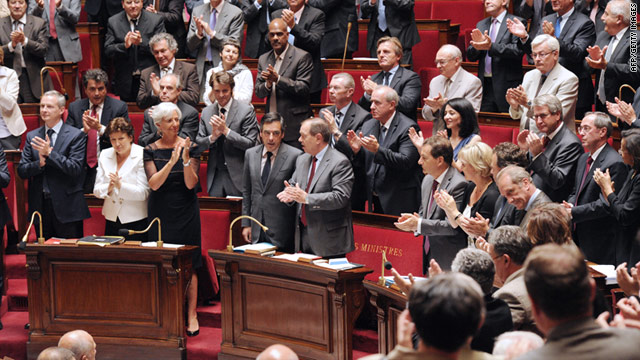 Paris (CNN) -- Two French journalists held hostage in Afghanistan since December 30, 2009, have been released along with their interpreter, officials said Wednesday.

The France 3 Television journalists, Herve Ghesquiere and Stephane Taponier, as well as interpreter Reza Din, had been held for 547 days.

They flew aboard a French government plane accompanied by a representative from the French Foreign Ministry, said French Embassy Defense Attache Eric Fournier.

In a statement, French President Nicolas Sarkozy thanked Afghan President Hamid Karzai "for the management of this crisis and all those who participated in the liberation of the hostages."

French Foreign Minister Alain Juppe released a statement extending his "warmest thanks to all those whose contribution to this happy outcome was decisive."

"I especially want to commend the actions of all state services who worked tirelessly for the duration of this case," he added.

Asked by CNN affiliate France 2 whether any ransom was paid, Juppe responded, "France does not pay ransoms."

The anchor followed up: "If that was the case, would you tell us?"

To that, Juppe responded: "There are cases where the reason of state prevails over other considerations, and I think nothing should be done that would threaten the process of freeing other hostages."

Nine French hostages are being held in Africa and the Middle East, he said.

Taliban militants had threatened to kill the journalists if several demands were not met, including the release of a number of detainees held by France.

"The release of your prisoners from the hands of our brethren depends on the withdrawal of your soldiers from our countries," a speaker asserted in an audiotape played on the Al Jazeera satellite news network in January.

The speaker, believed to be former al Qaeda chief Osama bin Laden, warned the French government that its alliance with the United States would prove costly.

French officials insisted the message would not change their strategy in Afghanistan or elsewhere.

Bin Laden was killed in May by U.S. Navy SEALs in a compound in Pakistan.

CNN's Richard Greene and Alan Silverleib contributed to this report