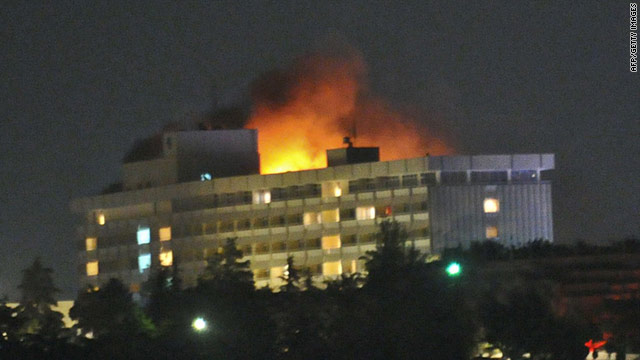 Check out the AfghanistanCrossroads blog for the latest developments in the war-torn country.

Information from the drone helped Afghan and coalition forces plan and conduct counterstrikes in the Hotel Inter-Continental attack, officials said.

In addition, a U.S. Blackhawk helicopter fired on up to six insurgents on the hotel roof, the officials said.

8 militants, 10 others dead after attack on Kabul hotel

The helicopter carried snipers from the the NATO-led International Security Assistance Force, the officials said. The snipers were not with the U.S. military, but the NATO-led force declined to specify their nationality because the snipers are special forces and their country views their identities a sensitive matter.

A NATO-led special forces team was also at the hotel to advise Afghan security forces, the officials said.

U.S. guest wrote will in hotel

At least 10 people were killed in the brazen, carefully orchestrated attack that raged into the early hours of Wednesday, officials said. The Taliban claimed responsibility for the siege, and authorities said eight militants died as well.