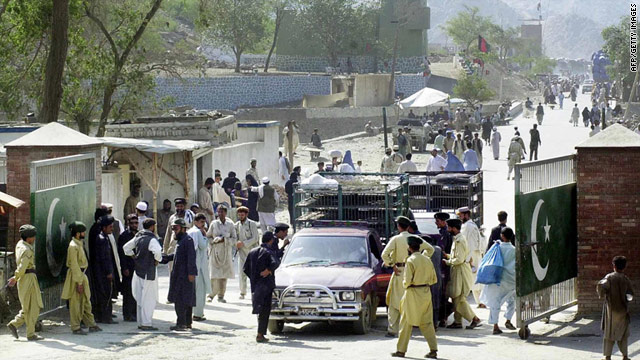 A border crossing between Pakistan and Afghanistan. The Haqqani network is believed to operate on both sides of the border.
STORY HIGHLIGHTS

Kabul, Afghanistan (CNN) -- The Pakistani Taliban recruited and trained a suicide bomber, then sold him to the Haqqani network to carry out an attack in Afghanistan, but he was arrested before pulling off the plan, an official with Afghanistan's National Directorate of Security (NDS) said Monday.

The accusation comes amid a growing war of words between Pakistan and Afghanistan, with each side blaming the other for instability and attacks, including cross-border bombardments. Last week Pakistan complained that the Afghan government and NATO were not doing anything to prevent the Taliban from crossing into tribal agencies in the east.

The Afghan NDS source, who did not want to be named for security reasons, said Afghan authorities arrested a man trying to commit a suicide attack in the Jaji Maidan district of Paktia Province in eastern Afghanistan. The bomber, identified as Sheer Hassan Khanjar, is from Miran Shah, Pakistan, and was recruited by Pakistani Taliban leader Hakimullah Mehsud, the official said.

It's difficult to stop militants crossing the border in that region but it's the responsibility of both sides to stop it.
--Pakistan army spokesman Major General Athar Abbas.
RELATED TOPICS

Sheer Hassan, the alleged would-be suicide bomber, told Afghan officials that someone working for Mehsud sold him and others to the Haqqani network.

Pakistan army spokesman Major General Athar Abbas said he had no information about claims the Haqqani network may be buying Pakistani suicide bombers from Mehsud and the Pakistani Taliban.

Abbas said the Pakistani government has long acknowledged that militants move back and forth along the border, and Pakistan is doing its part to stop it. "It's difficult to stop militants crossing the border in that region but it's the responsibility of both sides to stop it," Abbas said. "We have more than 900 check posts along the border and that's more than they have on the other side."

Tensions between the two nations have shown no sign of waning despite Afghan President Hamid Karzai's visit to Islamabad last month.