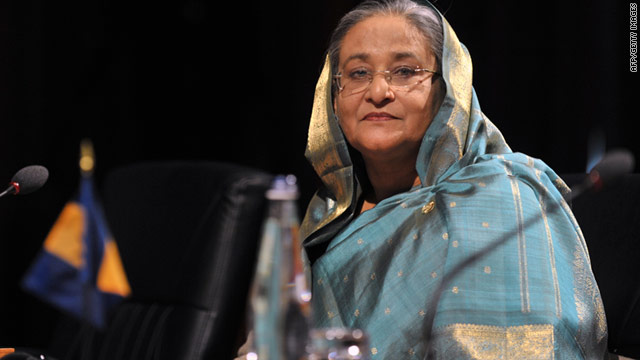 Dhaka, Bangladesh (CNN) -- The eldest son of a former prime minister is one of 18 people named in an arrest warrant in connection with the August 21, 2004, grenade attacks -- aimed at now-Prime Minister Sheikh Hasina -- that killed 24 people .

Ivy Rahman, the wife of Bangladesh President Zillur Rahman, was among the two dozen who died in the attacks at a rally for Hasina. Scores of people were wounded, including Hasina, who suffered minor injuries.

The attacks are believed to have been carried out by Harkat-ul Jihad al Islami, an outlawed Islamist group.

Abdullah Abu said Tarique Rahman aided and abetted the Zia administration in planning the attack it and helping the suspects flee the scene.

Since the end of Zia's tenure in 2006, Tarique is facing 14 cases on charges of corruption and extortion.

Zia's youngest son, Arafat Rahman, now in Thailand, has been recently jailed for six years on a corruption and money laundering charge.

Zia, who heads the opposition Bangladesh Nationalist Party and has served twice as the country's prime minister, said political vendettas are to blame in both her sons' prosecutions.

The BNP and its allies, soundly defeated by Hasina's Awami League in the 2008 general elections, have recently demanded midterm elections and launched an anti-government movement.

The grenade attack case took a new turn in 2008 when police arrested a former state minister for education in Zia's cabinet, Abdus Salam Pintu, on a charge of abetting and aiding militants to carry out the attack.

Both Pintu and Lutfozzaman Babar, state minister for home affairs in Zia's cabinet, are now in jail.

In an earlier charge sheet, Pintu and 21 other people, including top members of Harkat-ul Jihad al Islami, were accused in connection with the attacks.