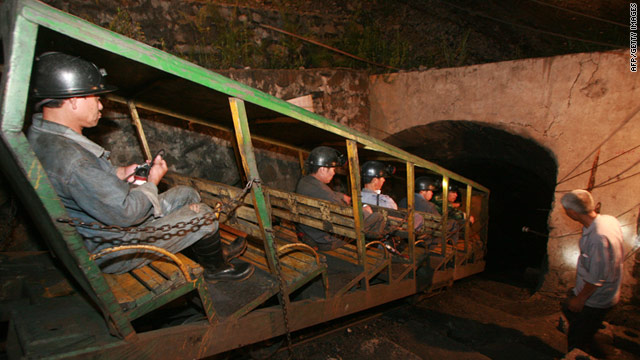 Rescuers make their way into a mine in Guangxi on July 2, where three bodies at the site were recovered.
STORY HIGHLIGHTS
RELATED TOPICS

Days of heavy rain caused a mine at Niupeng in Guizhou province to flood on Saturday morning; while "rain-saturated earth on the surface collapsed into a shaft" at another pit in Guangxi around noon the same day, killing three miners, Xinhua said.

The report added that more than 1,000 police, firemen, and paramilitary personnel joined the mission to rescue the trapped workers at Niupeng.

By Monday the water level at the mine had dropped but was still 40 meters (131ft) higher than where 23 of the miners are believed trapped, according to reports from China National Radio.

Local authorities said the heavy rain may have caused a previously dry river to rise, while possibly increasing the water level in underground rivers around the mines.

According to Xinhua, the Niupeng mine's investors have already been detained by the police.

At Guangxi, high concentrations of gas prevented workers from using machines to dig out another 19 trapped miners trapped at a depth of 390 meters (1,200ft), China Daily said. 50 other miners were reported to have escaped the cave-in.

"The rescue team is only equipped with shovels and rail track cars", Meng Qingguan, head of the Heshan Work Safety Bureau, told CCTV on Saturday.

Mining accidents are not uncommon in China, as very few of the mines follow the government's safety regulations. According to the State Administration of Coal Mine Safety (SACMS), almost 2,500 miners were killed in mine accidents in 2010.

However, the head of SACMS, Zhao Tiechui, said Tuesday that the number of miners dead or missing from accidents had decreased by 35% from last year, with just 807 dead so far in 2011.

Michele Philips contributed to this report.