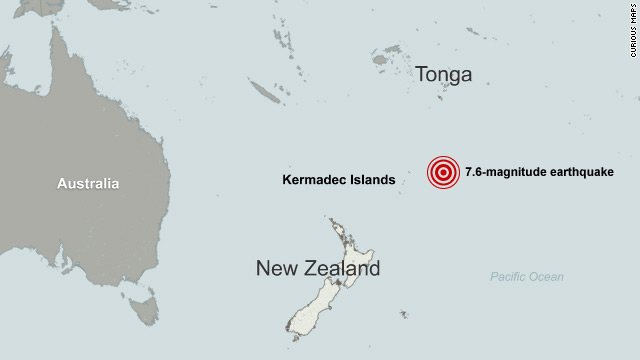 Did you feel the quake? Share images and video with CNN.

(CNN) -- The Pacific Tsunami Warning Center canceled a tsunami warning less than an hour after it was issued Wednesday for Kermadec Island, Tonga and New Zealand. A tsunami was detected following a major earthquake nearby.

A 1-meter-high tsunami washed ashore at Raoul Island, the largest and northernmost of the main Kermadec Islands, said Vinhlu Hsu, a geophysicist with the Pacific Tsunami Warning Center in Hawaii.

It caused no damage, he said.

The tsunami formed after an earthquake with a preliminary magnitude of 7.6 shook the Kermadec Islands at 7:03 a.m. Thursday (3:03 p.m. ET Wednesday), according to the U.S. Geological Survey. The quake was centered 163 kilometers (101 miles) east of Raoul Island, and 913 kilometers (567 miles) south of Nuku'alofa, Tonga, the survey said. The depth was a relatively shallow 20 kilometers (12.4 miles).

"Sea-level readings confirm that a tsunami was generated," the center said.

New Zealand's Ministry of Civil Defense and Emergency Management said it was keeping a marine threat warning in place throughout Thursday for waters off northern New Zealand.

Spokesman Vince Cholewa told CNN that boaters should not take to sea or operate in estuaries and people should stay off the beaches and coasts.

"There's no foreseen threat of inundation, but tides and waves could cause serious problems for boaters," said Cholewa. "We don't want people sightseeing down along the beaches today."

Boaters should take extra care to secure their ships in harbor, and should contact portmasters for the latest conditions, he urged.

The West Coast/Alaska Tsunami Warning Center said no tsunami was expected along the Pacific Coast in the U.S. or Canada.