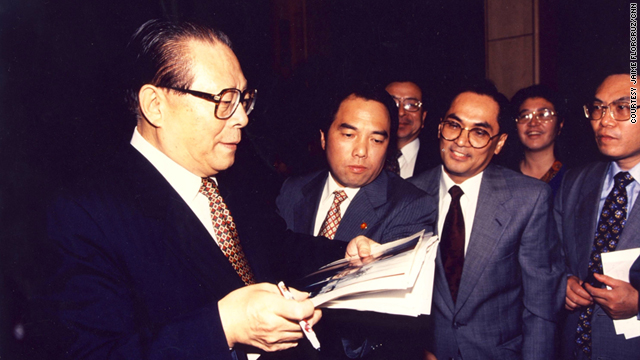 Then-Shanghai mayor Jiang Zemin with Jaime FlorCruz, a TIME Magazine reporter at the time, center at front, in 1985.
STORY HIGHLIGHTS

Beijing, China (CNN) -- How will Jiang Zemin be remembered?

I have been pondering this question in recent days amid the spate of rumors that the former president has gone to "meet Marx."

China has since dismissed the reports as "pure rumors." Still, this may be an opportune time to look back at Jiang's life as China's paramount leader -- a successor to the legendary strongmen, Chairman Mao Zedong and Deng Xiaoping.

I have followed Jiang's colorful career since I first met him in 1985, when I sat down with him for an exclusive interview for TIME Magazine. He had just been named mayor of Shanghai, China's then-largest metropolis.

He came across as an affable technocrat who took pride in occasionally speaking in English.

We conversed about old Hollywood movies, history and literature -- things he remembered while growing up as a teenager in Shanghai.

He even recited parts of Abraham Lincoln's Gettysburg Address in English. When I complimented him on his wide range of interests and talents, he said he was only a "Jack of all trades, a master of none."

An engineer by training, Jiang said he was mainly preoccupied with solving the megacity's housing and transport problems. "Our per capita housing space is about as big as a billiard table," he said. "People are not satisfied."

His biggest challenge, he added, was to lead Shanghai's renascence.

In June 1989, Jiang moved to Beijing for an even bigger job. After student-led protests in Tiananmen Square led to a brutal suppression that month, Chinese leaders were reshuffled, including the removal of reformists like Chinese Communist Party (CCP) General Secretary Zhao Ziyang. Paramount leader Deng Xiaoping would handpick Jiang as his successor.

For many years, however, Jiang languished under the shadow of Deng, dismissed as a political lightweight who did not have his own vision or constituency.

But Jiang proved his detractors wrong.

In October 1997, I saw him again up close when I joined a group of TIME editors for an exclusive interview on the eve of his first state visit to the United States. This time, Jiang was worrying about loftier concerns -- how to push China's economic reform, how to improve Sino-U.S. relations, how to impress Americans and put Tiananmen behind.

During the interview, I pressed Jiang on the issue of corruption among children of senior officials. He deflected it cleverly. Noting that both his sons studied overseas, he said, "I take great satisfaction that both of them behave very well, and both have come back to work here in China." As a doting grandfather, he said "one thing that I frequently warn myself is that I should not indulge them too much."

He remembered me from our 1985 meeting. When he autographed a picture of us taken in his office, he remarked how little we have aged. "You are my xiao didi (little brother)," he laughed heartily.

Jiang proved to be an astute politician and a clever wheeler-dealer.

He took all the No. 1 titles in the party, the government and the military. He showered the People's Liberation Army brass with perks and top ranks. He promoted his proteges into top posts in the party and government bureaucracies. And he outsmarted his political rivals, forcing some to retire early and jailing others for alleged malfeasance.

Jiang can take much credit for boosting national pride during his rule as general secretary of the CCP from 1989 to 2002 and as Chinese president from 1993 to 2003.

China regained sovereign control of Hong Kong in 1997 and Macau in 1999. In 2000, Beijing won its bid to host the 2008 Olympics, and China was accepted as a member of the World Trade Organization.

Moreover, China survived the Asian financial crisis and the diplomatic military standoffs with the United States. Remarkably during his tenure China's economy grew at an annual average of over 9%.

Not a bad legacy for a leader whom many China-watchers dismissed as a flash in the pan -- a mere transitional leader.

Of course, Jiang's legacy is a checkered one. While he is credited for the economic boom which helped the CCP hold on to power after Tiananmen in 1989, "his legacy is also one of having delayed the key political reforms that China must eventually face, if it is to avoid significant unrest in the future," China specialist Murray Scot Tanner said.

Dissident writer Dai Qing echoes the sentiment, saying, "(Jiang) did not push China towards democracy. He could not accomplish that."

Jiang had tried to engineer a breakthrough with Taiwan, which China considers a breakaway province that will eventually be reunited with mainland China. Experts say Jiang had wished to be remembered as the leader who brought Taiwan back into the mainland's fold, just as Deng Xiaoping is remembered for securing the return of Hong Kong and Macau to China.

During Jiang's tenure, he made conciliatory overtures to Taiwan, proposing the concept of "One Country, Two Systems" -- and more.

Thanks to reciprocal moves by Beijing and Taipei, cross-strait relations have markedly improved in recent years. Trade between the Taiwan and the mainland reached $145 billion last year, up by 36.9% year on year, according to a Xinhua report citing China's Ministry of Commerce. Over one million mainland tourists visited Taiwan last year, making them the largest source of tourists for Taiwan.

Yes, reports of Jiang's death seem premature, but if the former leader were to ponder his life, he would no doubt feel that reunification with Taiwan is long overdue.