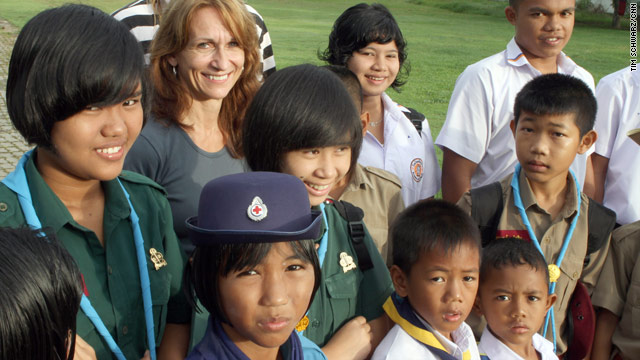 Phuket, Thailand (CNN) -- When Southeast Asia was rocked by a massive earthquake and tsunami in 2004, Susanne Janson was glued to her television in Stockholm, Sweden.

Her two daughters -- 14-year-old Eleonor and 12-year-old Josefin -- were vacationing in Thailand at the time with her ex-husband and his new family, and she hadn't heard any news of their whereabouts because phone lines were unreliable.

With such a lack of information, it didn't take long for Janson and her partner, Hans Forssell, to hop on a plane.

"I was so sure that when we arrived in Thailand, I would have a (text) message telling me that I could come back home because we missed each other in the air," Janson recalls. "Unfortunately, I didn't have that message."

When Janson and Forssell arrived in Khao Lak, the city her daughters were staying in, they learned that it had been one of Thailand's hardest-hit areas.

"There was nothing left ... everything had disappeared," Janson said.

Eventually, she had to face a tragic reality: that her daughters had perished along with their father and three other members of his family.

"When I realized I wouldn't bring them back home alive, I wanted to die," said Janson, 47.

Grief-stricken, and with no interest in returning to her advertising career, Janson was lost. But she frequently remembered the support and grace offered to her by the Thai people in their time of mutual crisis. So when she read that a Thai-Swedish couple she'd met were building an orphanage in Phuket for children who'd lost their families in the tsunami, she decided she wanted to help.

"I felt a connection with the Thai people," Janson said. "They had suffered so much more than I suffered. Here, you had people that lost children, homes, everything, and they were strong. So I think that affected me, and their kindness to me was such that I wanted to give something back."

In March 2005, Janson and Forssell returned to Thailand as volunteers at the orphanage, and in 2006 they made their stay permanent. They sold their Swedish apartment and became the managers of Barnhem Muang Mai, a care home that has helped more than 100 children to date.

For the first year, the facility cared for children and families directly affected by the tsunami. But as relatives reconnected after the tragedy, the original beneficiaries moved on and Barnhem's mission evolved.

Although Barnhem means "orphanage" in Swedish, Janson says Barnhem is no longer an orphanage in the traditional sense.

"It's a home for children and ... families actually in need," she said. "We don't just help children. If we can help a child ... by helping mother or grandmother and keep them together, that's even better than just (helping) the child."

All of the children at Barnhem come from dire poverty, and they've often endured abuse, crime or neglect. While most have no one else to care for them, some do. And whenever possible, Janson works to keep families together.

"Love is the first thing they need," she said. "Second (is) food ... but then it's school and education."

Janson and Forssell have learned to speak Thai fairly well, and with the help of their Thai co-manager, nicknamed Wow, they strive to give the children a real home with all of the love, household chores and homework that come with it.

"We want to be as close to a family as possible," Janson said. "Of course, we can't do it all the way, as we are a very big family. ... (But) when something is good, we are happy together. If something bad happens, we cry together. That's the most important if you work with children. Not so much head, but a lot of heart."

Education is also an important part of the Barnhem home, which is funded by charities, foundations and private individual donations. Janson ensures that a teacher visits after school to tutor youngsters who need extra support.

"We can't decide what they should do with their lives," she said. "But by helping them with education, we hope that we can help them have a choice."

In June, Barnhem achieved an important milestone. Fame, a teenage boy who's lived at the home since 2006, started college. After he passed his entrance exam, Janson found a Swedish family to sponsor his studies. She is excited about what it means for his future and that of the other children in her care.

"We hope we can help the other kids understand that they actually can change their lives," she said.

While Janson has made a new life and family for herself in Thailand, her daughters -- whose remains eventually were found in Khao Lak -- are never far from her mind.

"My daughters loved their life. And I wanted to show them that I would survive this. And if (I) could help my new children to love their lives, at least one good thing came out of this."

Want to get involved? Check out Barnhem Muang Mai's website at www.barnhem.org and see how to help.