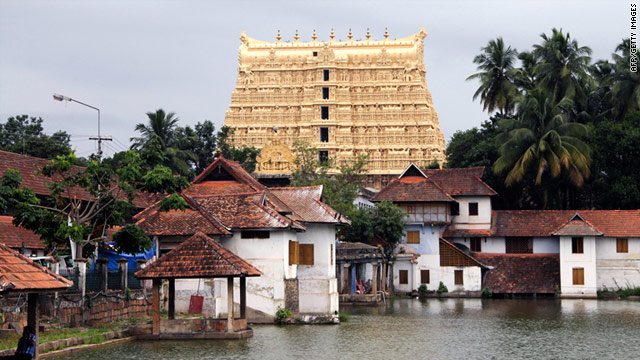 The riches were stashed for centuries in the vaults of the famed Sree Padmnabha Swamy temple.
STORY HIGHLIGHTS

The temple grabbed international headlines for its hoards of gold, gems and jewels believed to be worth billions of dollars.

Senior lawyer K.K. Venugopal, who is representing the trust that controls the famed Sree Padmnabha Swamy temple in the coastal state of Kerala, told CNN that the order came over issues of security and appraisal of the riches.

He explained that a curator needs to be appointed to determine the antique value of the artifacts. Some of them, he said, date back to the Napoleonic period.

The discoveries will also have to be filmed and catalogued in accordance with court directions, Venugopal added.

A seven-member team of explorers and temple officials last week began inventory of the treasure stashed in six underground chambers of the shrine by the royal family of formerly Travancore, now part of Kerala.

The stock-taking was ordered after a legal battle over temple management reached the supreme court.

Venugopal told the judges Friday that his clients -- descendants of the erstwhile royals -- do not claim ownership of the wealth.

They want that it should be used for social good, for the poor and for propagation of religion. The artifacts may also be kept in a museum," Venugopal said. The court will resume its hearing on the lawsuit next week.