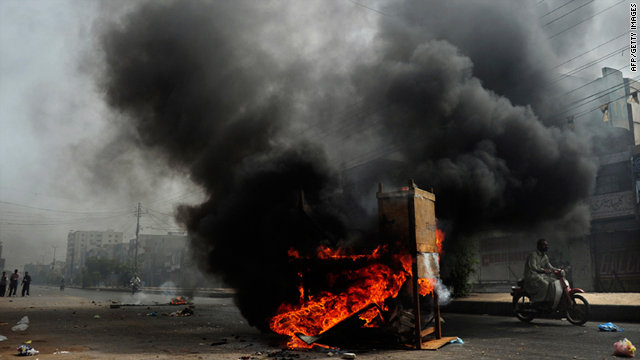 A motorcyclist rides past a pile of burning tires and furniture in a violence-hit neighbourhood of Karachi, Pakistan, on Friday.
STORY HIGHLIGHTS
RELATED TOPICS

The clashes have been blamed on a bitter rivalry between two political parties, the Muttahida Qaumi Movement and the Awami National Party.

The Muttahida Qaumi Movement mostly represents Urdu-speaking people who migrated to Pakistan from India during partition in 1947, while the Awami National Party represents Pashto speakers, more of whom are moving to Karachi from northwest Pakistan in search of jobs.

Violence between supporters of the two parties and other turf wars in Karachi have killed hundreds in recent years.

Another 18 people were killed Wednesday and 10 on Tuesday during clashes in several neighborhoods in Karachi, said Arslan Umar, another police official.