Australia plans to put a 'carbon price' on industrial emissions 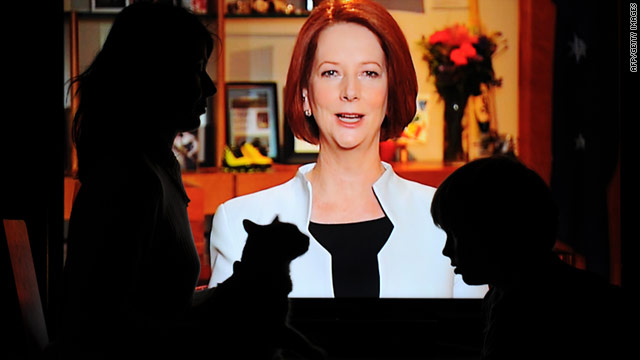 It expects to implement a combination of subsidies and tax cuts for private individuals to soften the potential economic blow of the measure to consumers, according to statements on the prime minister's website Sunday.

The fee on pollution is a key measure in the plan by the government of Prime Minister Julia Gillard to drastically reduce carbon emissions. It is intended to motivate businesses financially to move to cleaner energy sources.

"We have the right package. It will be in the parliament and legislated later this year," Gillard said at a news conference Sunday. "We are going to get this done. We are going to create a clean energy future.

The Australian government considers the measures necessary because it believes Australia is one of the world's worst polluters.

But opposition leader Tony Abbott sharply criticized the plan, saying Gillard had "betrayed the Australian people" by pushing it.

"This means a bigger deficit this year, higher debt, more taxes, smaller forecast surpluses in the future and greater pressure on interest rates," he said in a statement Sunday.

Around 500 businesses are expected to have to pay the "carbon price" of 23 Australian dollars (US $24.78) per ton of carbon emissions, according to the government.

"Australia will cut 159 million tonnes a year of carbon pollution from our atmosphere by 2020. That is the equivalent of taking over 45 million cars off the road," a statement on Gillard's website read.

News releases and websites announcing the measure avoided the use of the word "tax," instead using the terms "price" or "pricing."

But Abbott described it as a "go-it-alone carbon tax," saying the measure will "push up the price of electricity, gas, transport and food."

Revenues the government collects via the "carbon price" will be used to "assist households with tax cuts, increased family payments and higher pensions, benefits and allowances," according to Gillard's website.

"Carbon price revenue will also be used to support jobs and to invest in clean energy and climate change programs."

Nine of 10 Australian households will receive the assistance, according to a government news release.

The tax threshold for the poorest Australians will be raised, resulting in a million Australians no longer having to file a tax return, the government said.