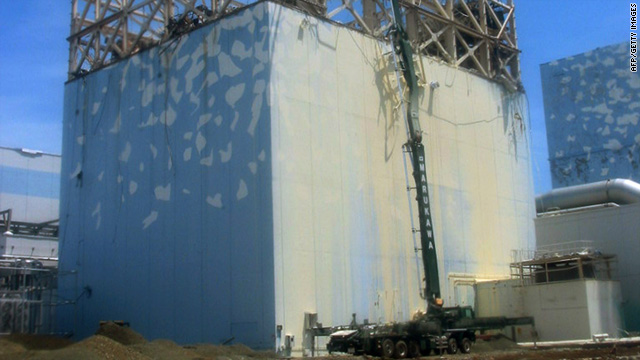 (CNN) -- Four months after Japan's devastating earthquake and tsunami, operators at the Fukushima Daiichi nuclear power plant are still grappling with the crisis the disaster unleashed but say they are making slow progress.

The March 11 quake led to meltdowns at Fukushima Daiichi's three operating reactors when the tsunami knocked out their coolant systems, causing the worst nuclear accident since Chernobyl.

Though nearly 100,000 tons of highly contaminated water remain in the flooded basements and service tunnels around the damaged reactors, the Tokyo Electric Power Company reported Sunday that water levels in the Unit 2 complex have dropped by about 20 centimeters (8 inches). The company began pumping water from the Unit 3 turbine plant to a waste treatment facility Sunday afternoon, while levels at Unit 1 remained unchanged.

And despite periodic setbacks -- including a water leak that shut down operations for several hours Sunday -- the company has managed to set up a decontamination system that filters radioactive material from the water. Some of the treated water is now being circulated back through the reactors, a key step toward keeping the reactors' melted nuclear cores cool on a permanent basis.

But more than 100,000 people have been displaced by the disaster, forced to leave towns around the plant after it spewed massive volumes of radioactive particles -- and it could be January before they know when they will be allowed to return.

In April, Tokyo Electric set a two-stage, six- to nine-month timetable for bringing the damaged reactors to heel. The first phase of that plan is set to be completed by July 17.

Goshi Hosono, the government's newly ordained minister in charge of managing the disaster response, said over the weekend that Tokyo Electric was on track to finish the first stage of its plan soon. But after meeting with displaced residents in the city of Fukushima on Sunday, he acknowledged that the road ahead would be "long and hard."

The disaster has led to the threat of power shortages in Tokyo during the summer and forced Japan to rethink its commitment to nuclear power. And the long-term cleanup of the plant is likely to take many years, Prime Minister Naoto Kan said Saturday.

"We expect three, five, 10 years or even decades to finally clean up the accident of Fukushima Daiichi Nuclear Plant," Kan said at a meeting of his ruling Democratic Party of Japan. "We need to hold a national debate about drastic reform of nuclear energy policy as well as overall energy policy."

CNN's Matt Smith and Yoko Wakatsuki contributed to this report.