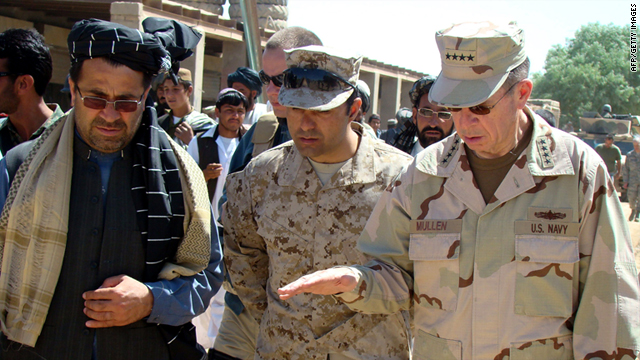 Kabul, Afghanistan (CNN) -- Two blasts went off Wednesday as the governor of Helmand province was headed to Kandahar to take part in the funeral for President Hamid Karzai's half-brother.

The remotely-detonated mine explosions in Kandahar's Maivand district wounded two soldiers but the Helmand governor, Mohammad Gulab Mangal, was unhurt, his office said.

Ahmed Wali Karzai, the Kandahar provincial council chief, was killed Tuesday by a guard during a gathering at his house a day earlier.

He was laid to rest Wednesday, with the president in attendance, said Hashim Watanwal, a Kandahar lawmaker.

Saidkhan Khakrezwal, a member of the Kandahar provincial council, told CNN he and others were with Karzai when a guard named Sardar Mohammad came into the room and asked to talk to him.

The guard then "takes Wali to another room and shoots him with a pistol that he had in his hand," Khakrezwal said. The shooter was shot dead by other guards.

Sardar Mohammad was a trusted man who had worked as a guard for Karzai for eight years, Khakrezwal said. He was also a commander for a police post where there were about 30 policemen.

The Taliban claimed responsibility for the shooting, saying that the guard accused of shooting him was working for them.

"The Afghanistan people have suffered a lot. Every Afghan family has suffered. I hope one day these sufferings end."

Ahmed Wali Karzai, who has been dogged by drug dealing and corruption accusations, had been the subject of WikiLeaks cables leaked last year.

Without being prompted, he discussed the accusations with a senior U.S. diplomat, according to one of the cables. He said that the claims are part of a campaign to discredit him and offered suggestions on how to stop drug dealing.

"He is willing to take a polygraph anytime, anywhere to prove his innocence," the cable said.

"He suggested that the coalition pay mullahs to preach against heroin, which would reduce demand for poppy cultivation."

A U.S. official who authored another cable wrote that even though he must be engaged as head of Kandahar's provincial council, "he is widely understood to be corrupt and a narcotics trafficker."

He said Karzai's "reputation for shady dealings" should be considered when he recommends "costly infrastructure projects.

The official said dealing with people like Ahmed Wali Karzai represents a major challenge in Afghanistan: Fighting corruption and building support for government when government officials are corrupt themselves.

Karzai "appears not to understand the level of our knowledge of his activities, and that the coalition views many of his activities as malign, particularly relating to his influence over the police," the author of the first cable said.