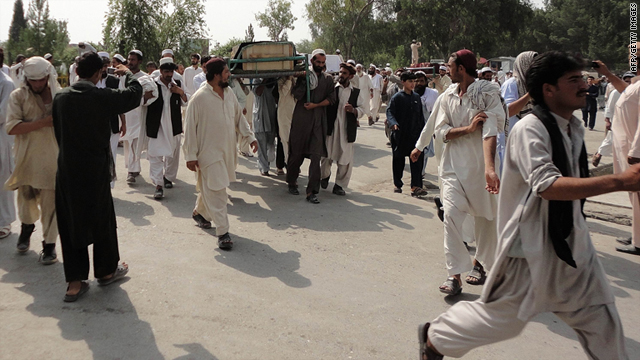 Afghan men carry the bodies of those killed in a night raid in Khost province on Thursday.
STORY HIGHLIGHTS
RELATED TOPICS

Mubarez Zadran, a provincial government spokesman, told CNN that the civilians were killed in a residential area of Khost province's Matoon district and said two others were wounded.

NATO's International Security Assistance Force reported a Wednesday operation in the region but said all of those killed were militants. ISAF said the action was carried out by an "Afghan-led combined security force."

The force said it killed six fighters from the Haqqani network, a militant group with Taliban ties that operates in Afghanistan and Pakistan. One female civilian sustained non-life-threatening injuries, ISAF said.

Mussa Majroh, a spokesman for the Khost education department, said a teacher and a student were among those killed in the night raid. Majroh said many people took to the streets to protest the killings.

"They were carrying the death bodies with them too on the streets and to the front gate of governor's office in the capital of Khost province," Majroh said.