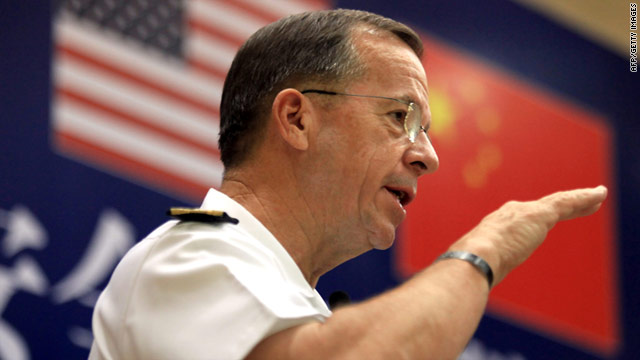 Seoul, South Korea (CNN) -- The threat from North Korea -- which started a war with South Korea in 1950 and launched two attacks against the South last year -- is very real and they could well attack again. That's the candid view of Chairman of the Joint Chiefs of Staff, Admiral Mike Mullen.

"North Korea shows no sign of relenting in pursuit of its capabilities and I'm not convinced they won't provoke again," he told reporters. "I've said for a long time the only thing that is predictable about North Korea is their unpredictability."

Fresh from a four-day visit to China, Mullen said he has asked China to take more of a leadership role in the region when dealing with North Korea and he wants a measured, multilateral approach when dealing with the hermit state, calling on Japan to help build a sense of deterrence.

However, Mullen did accept China's limitations when persuading North Korea to follow a particular path, saying "China certainly has influence in Pyongyang but it's not an infinite amount of influence and we need to understand that as we continue to work that challenge".

Mullen was in South Korea for the changing of the guard Thursday. U.S. Army General James D. Thurman was inaugurated as the new commander of the U.S. Forces Korea (USFK) and told U.S. and Korean dignitaries and military leaders, "It is a partnership forged and hardened during the arduous battles of the Korean War and honed and sharpened over the last 58 years."

There are currently 28,500 U.S. troops stationed in South Korea.

Mullen says the greatest sense of urgency for the U.S.-South Korea alliance was the two North Korean attacks last year.

In March, a South Korean warship, the Cheonan, was sunk killing 46 sailors. An investigation found North Korea to be responsible.

Mullen said, "The North should not mistake their (the South Korean government's) restraint as lack of resolve nor should they interpret it as a willingness to accept continued attacks to go unchallenged."