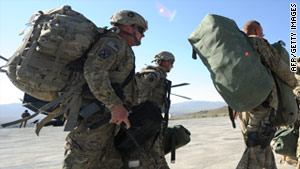 The full drawdown from Afghanistan is expected to take place by the end of 2014.
STORY HIGHLIGHTS
RELATED TOPICS

About 650 U.S. soldiers left the northeastern province of Parwan on Wednesday, according to Lt. Commander Colette Murphy, a spokeswoman for the NATO-led International Security Assistance Force.

Military officials say this is the first group of soldiers whose redeployment will not be replaced by a new rotation of fresh troops.

Another 600 troops are in the process of leaving, Murphy said. Both groups are from the Iowa National Guard.

The full draw-down is expected to take place by the end of 2014, gradually transferring responsibilities to Afghan government forces.

About 150,000 ISAF forces are currently in Afghanistan, including nearly 100,000 from the United States -- the largest NATO presence in the region since the U.S.-led war began in 2001.

But the costs of a near decade-long conflict may appeal less and less to a war-weary public, still reeling from the effects of a global recession.

Last month, nearly three-quarters of Americans polled said they support the U.S. pulling out some or all of its forces from Afghanistan.

The meeting -- Petraeus' seventh trip to the neighboring country as ISAF commander -- was part of an effort to "improve regional security," according to a NATO statement.

The United States is currently holding back $800 million in aid to its longtime ally, after Pakistan decided to reduce the number of visas for U.S. military trainers.

Relations between the two nuclear powers had soured after a U.S. raid on former al Qaeda leader Osama bin Laden's compound in May.

Tensions have also been strained by U.S. drone attacks in Pakistan's tribal areas that have sometimes resulted in civilian casualties.

Meanwhile, Petraeus' exit and the troop draw-down comes amid a rash of recent violence across Afghanistan, particularly in country's restive southern and eastern provinces.

On Thursday, a suicide bomber slipped into a Kandahar mosque and killed at least six people, wounding 15 others, a hospital official said.

The attack occurred as several high-ranking Afghan officials had gathered to remember President Hamid Karzai's half-brother, Ahmed Wali Karzai, the Kandahar provincial council chief and a key powerbroker in the region, who was slain Tuesday by a long-time bodyguard.

News of the draw-down has since raised looming queries about the country's future.

While diminishing numbers of NATO forces are expected to transfer power to their Afghan counterparts, skeptics question whether Afghanistan's fledgling security apparatus can effectively repel a resurgent militancy without foreign intervention.