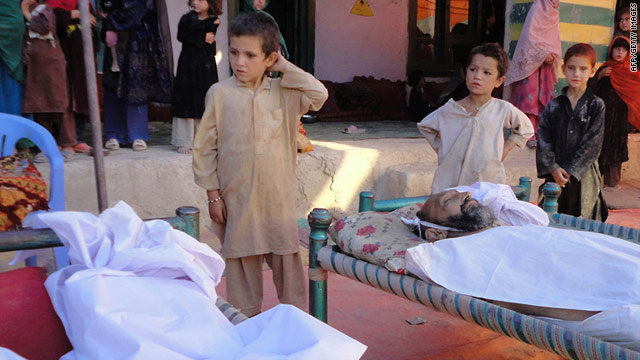 Afghan children stand over the bodies of people purportedly killed in a night raid in Khost province on July 14, 2011.
STORY HIGHLIGHTS
RELATED TOPICS

(CNN) -- The NATO-led command in Afghanistan is investigating a raid that led to the deaths of six Afghans and claims of civilian casualties.

The incident occurred Wednesday in the eastern province of Khost in an operation launched by Afghan and coalition forces, and the probe highlights the coalition's emphasis on avoiding civilian deaths.

The force approached a building and "was engaged with small arms fire."

"Coalition forces take every allegation of civilian casualties seriously and will conduct a complete assessment of the engagement," NATO's International Security Assistance Force said in a statement on Thursday.

President Hamid Karzai on Thursday ordered authorities to launch an investigation as well.

Mubarez Zadran, a provincial government spokesman, told CNN that six civilians were killed in a residential area of Khost province's Matoon district and he said two others were wounded.

ISAF had said it killed six fighters from the Haqqani network, a militant group with Taliban ties that operates in Afghanistan and Pakistan. One female civilian sustained non-life-threatening injuries, ISAF said.

"The target of the operation was a Haqqani leader responsible for indirect fire attacks against the Afghan National Army and the transfer of weapons and explosives throughout the district," ISAF said on Thursday.

Mussa Majroh, a spokesman for the Khost education department, said a teacher and a student were among those killed in the night raid. Majroh said many people took to the streets to protest the killings.

"They were carrying the dead bodies with them too on the streets and to the front gate of governor's office in the capital of Khost province," Majroh said.

Thie incident comes as the U.N. Assistance Mission in Afghanistan said on Thursday in a report that the use of powerful improvised explosive devices -- IEDs -- by militants in Afghanistan has caused a "dramatic" hike in "conflict-related civilian deaths" in the first half of the year.

Afghanistan saw a 15% mainly because of "the use of landmine-like pressure plate improvised explosive devices by anti-government elements," according to the UNAMA's Mid-year Report on Protection of Civilians in Armed Conflict.