Key provincial capital to be handed over to Afghan security forces 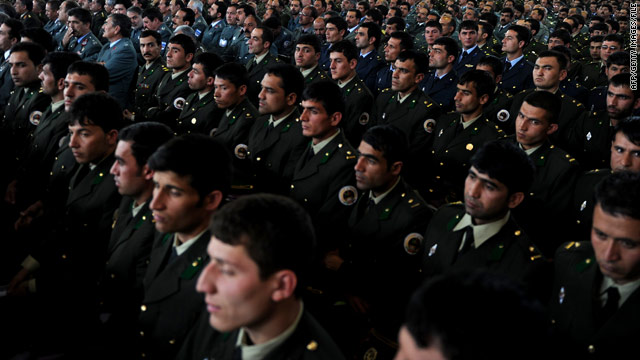 Kabul, Afghanistan (CNN) -- The restive Afghan city of Lashkar Gah, meaning "army barracks" in Farsi, is on Wednesday to become the third area handed over to national security forces by departing NATO troops.

The city is the capital of Helmand province, one of the world's largest opium producing centers and widely considered the most contentious of the first seven regions scheduled to be transferred.

It was a scene of heavy fighting and stiff resistance last year as a coalition "surge" swept southward in an effort to drive Taliban forces from their traditional heartland.

The province borders Pakistan, an international boundary scantily recognized by locals and virtually ignored by the largely Pashtun militants who cross it.

Still, authorities deemed Lashkar Gah secure enough to be among the first batch of transitions. Other areas to be transferred include parts of Herat, Balkh, Panjshir and Kabul provinces.

The handovers began Sunday, marked with a ceremony at a police station in Bamiyan province, a small, relatively stable area situated in the country's mountainous central region.

But with the United States scheduled to withdraw 10,000 troops by year's end, questions loom over the long-term security of Helmand province.

On Tuesday, Taliban forces claimed responsibility for an attack a day earlier that killed seven police officers just west of Lashkar Gah. The policemen were a part of the country's national police force, which is to help provide security for the region.

A senior political adviser to Afghan President Hamid Karzai and a parliament member also were killed Sunday in a house west of Kabul.

And last week, Ahmed Wali Karzai -- the president's half-brother and neighboring Kandahar's provincial council chief -- was shot dead by a longtime bodyguard inside his home.

Some officials point to what they say is a tactical shift by Taliban commanders to focus on high-level targets in the wake of battlefield setbacks. Wali Karzai's assassination, for which the Taliban claimed responsibility, punctuated questions for many Afghan officials about whom they can trust.

In a country that historically the British and Soviets could not tame, U.S.-led forces have eliminated many members of the Taliban's senior and mid-level leadership, driving insurgents south and east beyond the nation's recognized boundaries.

But, as David Petraeus -- the general selected by President Obama to direct the CIA -- mentioned Monday in a formal ceremony handing NATO command to Gen. John Allen, militant attacks do not emanate exclusively from Afghan soil.

"There is nothing easy about such a fight, especially when the enemy can exploit sanctuaries outside the country," said the outgoing commander.

Allen, who assumed control of the largest NATO force engaged in the region since the war began in 2001, told the Senate Armed Services Committee in May that the drawdown, which is expected to be completed by the end of 2014, is more aggressive than he anticipated.

The two men last week crossed into Pakistan to meet with top Pakistani military brass in an effort to "improve regional security," according to a NATO statement.