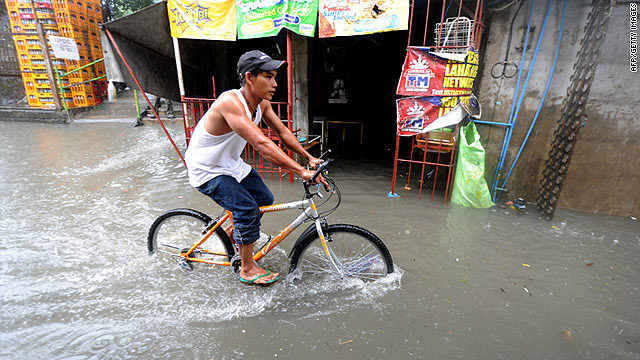 A man rides a bicycle through floodwater after heavy rain in Manila on July 26, 2011.
STORY HIGHLIGHTS
RELATED TOPICS

(CNN) -- A tropical storm moving through the Philippines on Wednesday has killed 27 people and left more than 60 injured or missing, according to a government disaster response agency.

The slow-moving storm continues to drag through northern parts of the island nation at about 10 mph (16 kph). It is expected to cross into parts of the Northern Luzon island Wednesday night, the agency said.

Though winds have decreased slightly, the agency warned against gusts of up to 60 mph. The government has been tracking the storm since it intensified from a depression Monday.

Several barangays, or villages, have been flooded, and rescue efforts are under way to find missing people, the agency said.

Government officials held an emergency meeting Wednesday to assess and coordinate their response to the storm damage.

Officials cautioned residents in low-lying areas and mountainous regions about flash floods and landslides, while coastal regions have been warned about storm surges and deadly waves.

The storm is expected to continue to bring widespread rain throughout the Luzon island until the end of the week, the agency said.