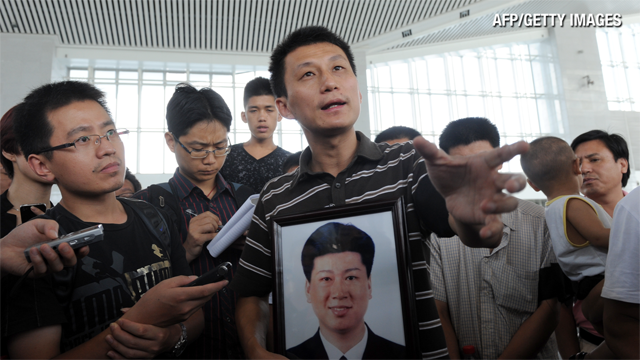 Wen made the pledge on the crash site near Wenzhou in eastern Zhejiang province, where a bullet train was struck from behind Saturday night by another train, killing at least 40 people and injuring almost 200.

"Our investigation has to answer to the people," Wen said after laying a bouquet of flowers at a makeshift memorial on the scene. "There will be a thorough probe into the accident, including all relevant aspects from equipment failures, management problems to manufacturing issues."

"If corruption is found during the investigation, we will take it seriously and punish those responsible to the fullest extent of the law," he added.

Before addressing reporters at the crash site, Wen met victims' families and visited injured passengers at a local hospital. He said the government must show compassion in dealing with people affected by the tragedy, reminding officials that "money would not bring lost loved ones back."

State media Tuesday reported that local authorities would offer bonus money to victims' families who settle early with the government, which has capped the total compensation at 500,000 yuan (77,000 U.S. dollars). Local officials later denied the story amid fierce criticisms online.

Chinese netizens have also been fuming over the railway ministry's decision to end search-and-rescue operation after less than six hours, and its move to crush and bury one of the six derailed train cars when the investigation had barely started.

In a nod to such sentiment, Wen said railway officials owed the public an answer while stressing the importance of an open and transparent investigation.

"The key to the handling of the accident is whether we let people know the truth," he said. "During the process, we should release information to the public timely and accurately."

Wen, China's third most senior official after President Hu Jintao and legislative chief Wu Bangguo, has long been the public face of the top leadership in times of disasters and tragedies. He made a point of explaining his uncharacteristic absence from the scene until five days after the crash, saying he had been sick and confined to a hospital bed for 11 days.

Now the world's second-largest economy, and flush with cash, China has built the world's longest high-speed rail network -- boasting more than 8,300 kilometers (5,100 miles) of routes -- in a few short years. The government plans to pour over $400 billion into rail projects in the next five years and also wants to export its technologies to markets that include the United States.

The massive investment and rapid construction have long raised public doubts on the new lines' safety and commercial viability, and last Saturday's accident has only bolstered critics' arguments.

"I think the bullet train system is not stable and may break down in extreme weather conditions," said Professor Zhao Jian, a transportation expert with Beijing Jiaotong University. "The previous railway minister developed high-speed rail irrationally and unscientifically, and this accident was the consequence of that 'great leap forward' strategy."

Wen assured skeptics home and abroad that the government would learn its lessons and do its utmost to restore people's faith in China's high-speed rail.

"If safety is compromised, there is no credibility to speak of," he said. "It is important that we integrate our effort in pursuing speed, quality, efficiency and safety with the understanding that safety always comes first."