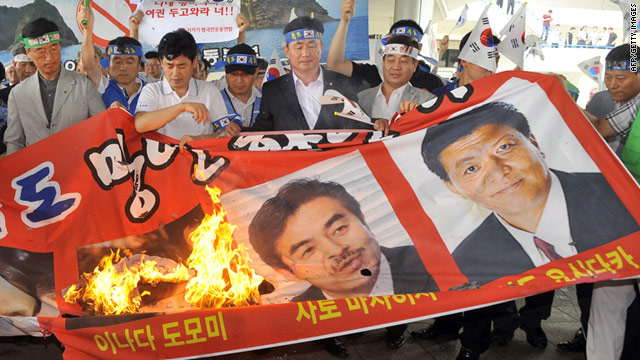 Seoul, South Korea (CNN) -- Three Japanese lawmakers were denied entry at a South Korean airport Monday after they announced they would attempt a visit to an island near disputed territory in what Korea calls the East Sea and Japan calls the Sea of Japan.

The lawmakers arrived at Gimpo International Airport near Seoul at 11:20 a.m. but were denied entry by the immigration service, according the Ministry of Justice.

The trio is expected to return to Japan on a later flight, but details were not yet available, the Ministry of Justice said.

The Japanese politicians announced they would visit Ulleung Island -- adjacent to the disputed Dokdo islets -- after the two countries clashed over a civilian aircraft running a test flight over the area.

The islets in the sea to the east of Korea, known as Dokdo in Korea and Takeshima in Japan, have been a prickly issue for both countries. Japan has long claimed the islets as its territory, but Seoul said all Korean territory was returned after the country won independence from colonial rule by Japan in 1945.

The South Korean Foreign Ministry warned Friday that the government would not allow the three politicians to enter the country, saying it cannot guarantee the safety of the lawmakers and that the decision is out of consideration of bilateral relations.

Monday's visit is widely viewed as an act of protest by right-wing politicians after the two countries clashed over the islets last month.

The Japanese government issued a ban on flying with South Korea's flagship airline, advising Japanese officials to refrain from flying with Korean Air in July. Korean Air had conducted a test flight over the islets twice to celebrate the launching of its new aircraft in June.

Seoul demanded Tokyo withdraw the ban, but with no success.

South Koreans view the islets as a source of national pride and have taken various measures to reassert its ownership of the islets. The land is largely uninhabited with only seven registered residents.