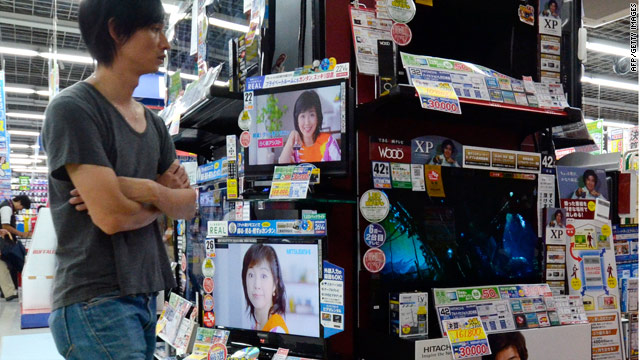 Tokyo (CNN) -- Japan-based Hitachi is known by global customers for making TVs. But on Wednesday, the company said it is considering ending its television production operations in Japan.

"We are considering ending production operations in Gifu, Japan, but a concrete decision has not been made yet," said Hitachi spokesman Atsushi Konno.

The Gifu plant in central Japan is the last Hitachi TV factory in the country. Ending the production of televisions there would continue the company's cost-cutting strategy of outsourcing primary television production outside of Europe and Japan, Konno said.

Hitachi has been increasingly outsourcing the building of televisions to countries like Taiwan, using Japanese workers to instead build components for the sets. Hitachi then buys back the assembled televisions.

The Gifu plant current employs 250 people, and none would lose their jobs, Konno said. The employees would shift to building a core component for the outsourced TVs.

Japan's exporters have been under increasing pressure from the downward spiral of the U.S. dollar and the surging Japanese yen. A strong yen potentially means millions of dollars in lost profits when the money is repatriated in Japan.

Jesper Koll, JP Morgan's head of Japanese equity research, estimates that corporate Japan overall has lost about 5% in profits in just the last six weeks as the U.S. dollar has fallen on uncertainty over the debt deal in Washington.

With every 1 yen move up against the U.S. dollar, Toyota estimates it loses about $385 million. In the last month, the yen has surged four times that amount, eating out more than a billion dollars out of Toyota's books.

Toyota Senior Managing Officer Takahiko Ijichi, announcing the automaker's 1st quarter earnings for Japan's 2012 fiscal year, spoke bluntly to reporters on Tuesday about the currency exchange. He called it too much for exporters to bear.

"I understand that it's our fate to adapt to ever-changing exchanging rates. But this situation, where the yen has passed 80 yen (to the dollar) and is now at 76 yen, for us exporters, it's extremely tough," he said.

Japan's Prime Minister Naoto Kan met with his cabinet on Wednesday to discuss the impact of the yen on Japan's economic recovery in the wake of the March 11 earthquake, tsunami and nuclear crisis. Kan called the yen's rise "a source of concern" for Japan's economy and urged the Bank of Japan to support the economy from the monetary side.

Japan's central bank will meet Thursday for a two-day meeting under growing pressure to consider quantitative easing to stem the surge of the yen.

Japan's yen remained at 77 to the dollar, just a hair below a post-World War II record of 76.25 shortly after the March disasters.

Hitachi's spokesman would not discuss the negative impact of the yen on the company, but did say the company faces a mitigating factor in the surging domestic currency-- a strong yen does help Hitachi when buying back the outsourced televisions from outside of Japan.