Typhoon fuels monsoon in the Philippines 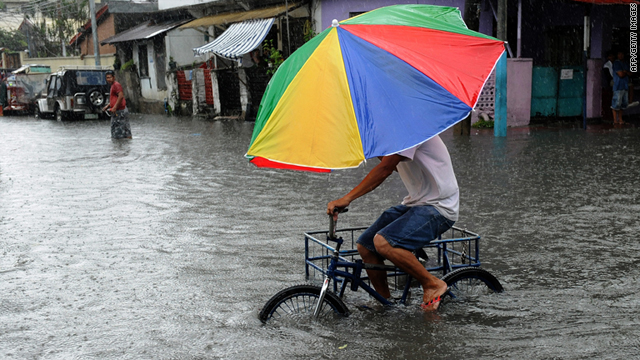 A man rides a tricycle along a flooded road in Quezon City in suburban Manila on August 2.
STORY HIGHLIGHTS
RELATED TOPICS

(CNN) -- A typhoon some 1,600 kilometers (994 miles) from the Philippine capital is supercharging summer monsoon rains, which have flooded parts of Manila and could trigger flash floods and landslides across other parts of the country, forecasters said Wednesday.

The Philippine government said Typhoon Kabayan was expected to enhance the monsoon over the entire island of Luzon, where Manila is located, according to the country's National Disaster Risk Reduction Management Council.

The Philippine Atmospheric, Geophysical and Astronomical Services Administration said that the western part of Luzon will experience monsoon rains on Wednesday, which could cause flash floods and landslides. The typhoon was reported to be some 1,055 kilometers (655 miles) east-northeast of Basco, Batanes, Philippines, Wednesday morning.

Government officials said relief goods have been positioned in areas that could be affected by the typhoon, according to the Philippines News Agency.

The Department of Education canceled classes Wednesday afternoon, the agency said, because of expected heavy rains.

Veronica Lon, a CNN iReporter, said about 35% of metropolitan Manila is submerged under water and hundreds of families are in evacuation centers.

"This is a unusual scene in our city and always, it only takes a few minutes for the flood to form," Lon said. "More than half the city and about 75% of metro Manila area had floods," she said.