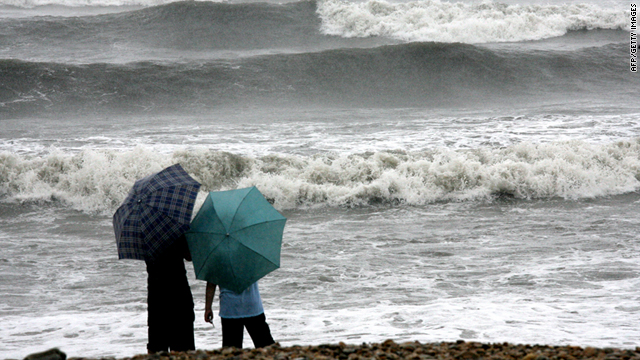 (CNN) -- Tropical Storm Muifa killed at least 10 people and damaged an estimated 2,400 acres of of farmland when it made landfall in North Korea, state-run news agency KCNA reported Tuesday.

The agency estimated more than 100 homes were damaged in the South Hwanghae province, in the country's southwest. Power poles collapsed throughout the province, causing blackouts in some areas, the agency said.

Muifa made landfall in North Korea as a typhoon on Monday, bringing heavy rainfall and gusty winds, according to the Joint Typhoon Warning Center. The storm, which was downgraded to a tropical storm after making landfall, came ashore about 7 p.m. Monday (6 a.m. Monday ET).

At least 490,000 people were evacuated from Shandong and Liaoning provinces in eastern China, Xinhua reported. No deaths or injuries were reported.

In the city of Dalian, in Liaoning, authorities were able to avert the spill of toxic chemicals from an industrial plant after 65-foot (20-meter) waves broke through a dike protecting the area and threatened to flood the plant, according to Xinhua. Workers dumped concrete and rocks to fill in the hole.