Man with ties to Bali bombings is returned to Indonesia 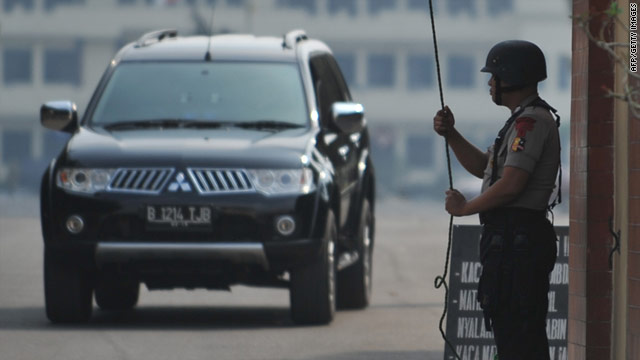 Police guard the gate of the police detention centre in Kelapa Dua where Umar Patek is being held after arriving in Indonesia.
STORY HIGHLIGHTS
RELATED TOPICS

(CNN) -- Umar Patek, one of Southeast Asia's most wanted men for his alleged involvement in a series of deadly bombings, was repatriated to Indonesia Thursday, Indonesian authorities said.

Patek arrived Thursday morning from Pakistan with a team of Indonesian security and immigration officials, and is being interrogated by police, Indonesian Antiterrorism Chief Ansyaad Mbai told reporters.

Patek was arrested in January in Abbotabad, Pakistan, the same town where Osama bin Laden was killed a few months later. Mbai says it's unclear what Patek was doing there.

When asked by reporters if Patek had made any confessions, Mbai said, "he acknowledged that he was involved in the first Bali bombing and involved in the Christmas bombing 2000."

Patek, an Indonesian of Javanese and Arab descent, also is suspected of acting as the deputy field coordinator of the 2002 bombings on the Indonesian island resort of Bali that killed 202 people, most of them western tourists.

Seven Americans died in the attacks, prompting the United States to offer a $1 million bounty for Patek's capture.

A key leader in the Indonesian terrorist group Jemaah Islamiya, Patek, fled to Mindanao in the southern Philippines in 2003, authorities and security experts said.

Indonesia has enacted a more robust anti-terrorism law since the first Bali bombings, meaning Patek couldn't be prosecuted under it if he is charged in the investigation.

"Our terrorism law cannot be retroactive but it doesn't mean he cannot be prosecuted in Indonesia," Mbai said.

"I don't think prosecutors will have a difficult time convicting him of his role in the first Bali bombing, even if they can't use the anti-terrorism law," terrorism analyst Sidney Jones with the International Crisis Group said.

Indonesia's Emergency Law No. 12 prohibits the possession and us of explosives and weapons.

"He can still get a stiff sentence," Jones said.

There has been speculation about how radical Islamic groups and jihadists will react to Patek's return to Indonesia, although Jones said he will not be able to exert that much influence.

"He's in custody, after all, and will be under close watch," she said.

"But he's written for radical websites in the past, and the police will have to monitor his visitors carefully to ensure that they are not taking out written tracts or recordings that can then be posted online."