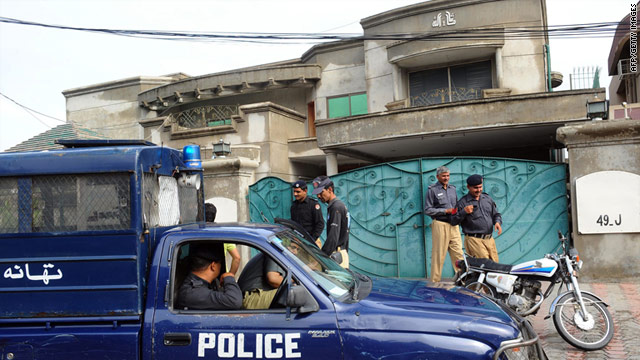 Islamabad, Pakistan (CNN) -- The three security guards and the driver of an American development expert who was abducted in Pakistan on Saturday have been detained for questioning, a police official said Monday.

The four men are not considered suspects at this point, said the official, who asked not to be named because he is not authorized to speak to the media. Under Pakistani law, police can detain someone for up to 72 hours without charging them with a crime.

Investigators have no leads in the case and are not any closer to finding out what happened to the American, whom the U.S. Embassy identified as Warren Weinstein.

Weinstein was abducted early Saturday when gunmen, posing as neighbors offering food, pistol-whipped him and his driver and tied up his guards, U.S. Embassy and Pakistani officials said.

Weinstein works for J.E. Austin Associates Inc., a U.S. consulting firm based in Arlington, Virginia, a Pakistani official said. He's is a world-renowned development expert, with 25 years of experience, according to his company's website. The site says he was heading what the company described as the "Pakistan Initiative for Strategic Development and Competitiveness."

As Weinstein's security guards prepared for the meal before the Ramadan fast early Saturday, three men knocked at the front gate and offered food for the meal -- a traditional practice among Muslims during the Ramadan holy month, according to senior Lahore police official Tajamal Hussain.

Once the gate was opened, the three men forced their way in while five other suspects entered the house from the back, Hussain said. The men tied up the three security guards and duct-taped their mouths, he said. They pistol-whipped the driver and forced him to take them to Weinstein's room, where the men hit Weinstein in the head with a pistol, and forced him out of the house and into a waiting car, Hussain said.

He said Weinstein is in his 60s.

There has been no claim of responsibility nor any demands by any groups, according to senior police official Awais Ahmed.

Weinstein has lived in the residence in an upscale Lahore neighborhood for several years, Ahmed said.

Weinstein is a Fulbright Scholar in Belgium and is proficient in six languages, with a doctorate in international law and economics, according to his company website.

The U.S. State Department updated a travel advisory for Americans traveling and working in Pakistan this week, warning that extremist groups operating in the country were continuing to target U.S. and other Western citizens and interests.

It cited part of the reason for the advisory as "reported" abductions of U.S. citizens "for ransom or personal reasons," including the kidnapping of a U.S. citizen in Lahore in June. No further details about that incident were released.

Abductions are not unusual in Pakistan, though those targeted are typically Pakistani rather than American or Western.

In early July, a Swiss couple was grabbed at gunpoint while traveling in the town of Loralai in the volatile southwestern Balochistan province, provincial officials said at the time.

Three weeks after their abduction, Pakistani authorities said they believed the couple was still alive.

Raymond Davis, a CIA contractor, was charged with killing two men in January but was released in March after compensation was paid to their families.