Tibetan monk dies after setting himself on fire 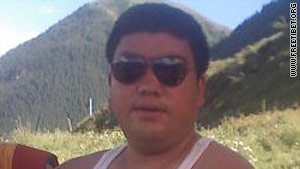 Beijing (CNN) -- A 29-year-old Tibetan monk died after setting himself on fire Monday in southwestern China, according to state-run Xinhua news agency and Tibetan activists.

Chanting "Long live the Dalai Lama" and "Tibetan people want freedom," Tsewang Norbu - also known as Norko - doused himself with gasoline and lit himself ablaze in the center of Tawu county, an ethnic Tibetan area in Sichuan province, the London-based Free Tibet organization said in a statement.

The two-sentence Xinhua dispatch offered no details on the monk's death.

Citing unnamed witnesses in Tawu, prominent Tibetan writer and activist Tsering Woeser told CNN that Norko died at the scene and his body was carried back to the Nyitso Monastery by local residents.

"Security forces tried to snatch the body at the scene but didn't succeed," she said from Lhasa, the Tibetan capital. "They had surrounded the monastery as of Monday night."

She said she was unable to reach her local contacts Tuesday. The Free Tibet statement said authorities had disconnected most phone and internet access to prevent the news from spreading.

Despite a government ban, the local community - including Norko's Nyitso Monastery - recently celebrated the birthday of the Dalai Lama, the exiled Tibetan spiritual leader viewed by Beijing as a separatist, Free Tibet said. Officials punished the defiant locals by repeatedly cutting the monastery's utility services, the statement added.

It shows the total lack of religious freedom and the painful state of mind for many Tibetans.
--Activist Tsering Woeser
RELATED TOPICS

Two young Tibetan monks set themselves on fire in 2009 and last March, respectively, in the Aba county, another ethnic Tibetan area in Sichuan province, according to Xinhua. Activists say the disturbing acts reflect an increasingly repressive environment under Chinese government rule.

"It shows the total lack of religious freedom and the painful state of mind for many Tibetans," Woeser said. "As the government responds to these incidents with more force, it's only going to strengthen unity and resentment among Tibetans."

The March incident, in which the monk died, sparked weeks of sometimes-violent confrontation between local monks and authorities. Security forces locked down the Kirti Monastery in Aba and eventually detained more than 300 monks, rights groups said at the time.

When the United Nations working group on enforced disappearances expressed its concern to Beijing, Chinese officials called the organization's perspective "biased and unfair."

"The relevant local authorities are conducting legal education for the Kirti Monastery monks to maintain religious order there - there was no question of forced disappearances," Hong Lei, a foreign ministry spokesman, said in June.

China also rejects accusations of oppression of Tibetans, saying its rule has greatly improved living standards for the Tibetan people.

The Chinese government has tightened security in Tibet and surrounding regions in recent months as it commemorates the 60th anniversary of the "peaceful liberation" of Tibet, activists say.

The Dalai Lama's representative signed an agreement with Beijing in 1951 to affirm China's sovereignty over Tibet but also grant autonomy to the area. A failed uprising against Beijing's rule in 1959 forced the Dalai Lama into exile.

The Dalai Lama, a recipient of the Nobel Peace Prize, denies seeking independence for Tibet, saying he wants genuine autonomy, under which Tibetans can make their own policies on key issues, such as religious practices.

In a 2008 uprising, violent unrest in Tibet and the subsequent military crackdown left at least 18 dead, and activists say tensions have remained high in many areas since then.