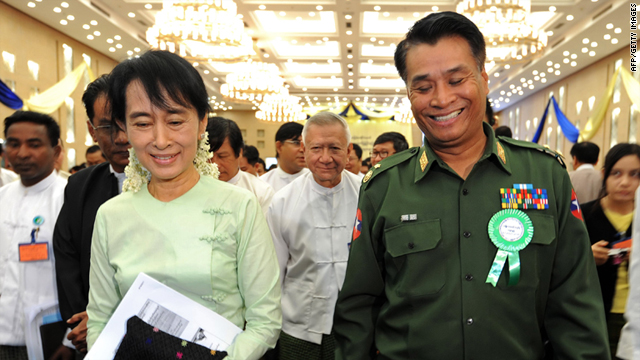 The Nobel Peace Prize winner met the leader at the presidential residence in the nation's administrative capital, Naypyitaw, on Friday, the New Light of Myanmar said.

A spokesman for the National League for Democracy (NLD), Suu Kyi's party, confirmed to CNN that their talks lasted about an hour, but did not know what was discussed.

However, Nyan Win said he thought the meeting "may be the first step towards national reconciliation."

Suu Kyi is expected to return from Naypyitaw to Yangon, the country's main city, later Saturday, he said. Once there, she will meet with party members to discuss their agenda.

A week ago, Suu Kyi made her first political trip outside Yangon since her release from house arrest last November, visiting the northern town of Bago.

She has spent most of the past two decades in some form of detention but was freed a week after an election was held on November 7 -- the country's first in two decades.

The NLD was barred from taking part in the ballot because it refused to register under the country's new constitution, which automatically made it illegal.

The constitution requires more than 100 military nominees in parliament, which critics say is aimed at tightening the regime's grip on Myanmar. Critics also raised concerns the election would create a facade of democracy.

The NLD intends to present its case over the legal status of the party to the United Nations Human Rights Council, Nyan Win said.