Thaksin predicts no Thai coup in event of return 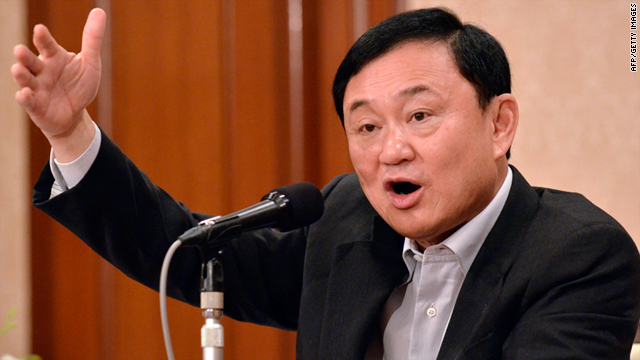 Tokyo, Japan (CNN) -- Former Thai Prime Minister Thaksin Shinawatra predicted there would not be a coup in Thailand if he were to return from exile.

Thaksin, whose youngest sister Yingluck was just elected Thailand's first female prime minister this month, is living in exile in Dubai. A polarizing figure in Southeast Asian politics, the twice-elected Thai prime minister was ousted in a military coup in 2006 and faces jail in Thailand after being convicted of corruption.

The Japanese government allowed Thaksin a visa for his visit after a strong request by Thailand; however, Japan's immigration control law bans the entry of foreign nationals with criminal charges.

Thaksin said the purpose of his weeklong visit is to help post-quake and tsunami reconstruction in northern Japan. He is scheduled to meet with Japanese political and business leaders on Wednesday and visit two tsunami-struck cities in Miyagi prefecture later in the week before leaving Japan on Sunday.

Thaksin called himself an "encyclopedia" for Yingluck, a neophyte in Thai politics, and said they were close. Critics have called her Thaksin's "puppet."

She has her own right and leadership to run the country without my interference at all
--Thaksin Shinawatra, former Thai prime minister
RELATED TOPICS

"She has her own right and leadership to run the country without my interference at all," Thaksin said. "Whenever she needs advice, she calls me and I give her advice. That's all."

He said that the committee that investigated him was appointed by the military junta and consisted of his political opponents. "This is totally against the rule of law from the beginning," he said.

Last month Yingluck said authorities would review the case against her brother and others.