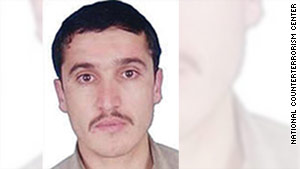 According to a U.S. official, Atiyah Abdul Rahman rose to the number two spot after the death of Osama bin Laden.
STORY HIGHLIGHTS

(CNN) -- The death of al Qaeda's No. 2, Atiyah Abdul Rahman in Pakistan, is a hammer blow to the terrorist organization.

According to a U.S. official, Abdul Rahman, a 43-year-old veteran Libyan operative, rose to the number two spot after the death of Osama bin Laden in May, which saw the Egyptian Ayman al Zawahiri take over the leadership of the terrorist group. In that capacity Rahman ran daily operations for the group, according to the official.

"There's no question this is a major blow to al Qaeda. Atiyah was at the top of al Qaeda's trusted core," the official said.

Intelligence garnered from bin Laden's compound in Abbotabad, Pakistan, showed that Rahman had emerged as bin Laden's key deputy in the years before his death.

It was mainly through Rahman that bin Laden continued to issue instructions to al Qaeda operatives around the world. These messages, U.S. intelligence agencies established, were passed on in the form of draft e--mails copied onto thumb drives that were smuggled out of the compound by a courier. Bin Laden's plans sent on to Rahman included the idea of attacking the United States on the 10th anniversary of 9/11, according to the Washington Post.

Rahman appears to have been killed by a drone strike in the tribal areas of Pakistan, a fate he may have been expecting. According to reports, he sent a message to bin Laden a year before the latter's death complaining of the danger to the organization's operatives by the strikes.

The Libyan will be very hard to replace.

"Rahman has been at the nerve center of al Qaeda's global terrorist operations," Noman Benotman, a former Libyan jihadist acquainted with Rahman, bin Laden and other top al Qaeda leaders, told CNN in an interview earlier this week. "He has become their CEO, the only person that al Qaeda cannot afford to lose."

Rahman has played a growing operational role for al Qaeda in recent years. In 2008 he helped handle Bryant Neal Vinas, an American al Qaeda recruit who helped al Qaeda develop a bomb plot against the Long Island Rail Road in 2008, according to a U.S. counter-terrorism source familiar with Vinas' subsequent interrogation.

An al Qaeda plot to attack Europe with Mumbai-style attacks in the fall of 2010 was approved by bin Laden through communications with Rahman according to several reports.

According to Benotman, now a senior analyst at the Quilliam Foundation, a U.K. counter-terrorism think tank, Rahman was one of the sharpest jihadist operatives he had ever encountered. He said Rahhman and Zawahiri had recently developed a strategy to rebuild al Qaeda by reorganizing its relations with its affiliates, rebranding its message to expand its support base and repositioning its energies to take advantage of the fast pace of events in the Arab world, including in Yemen where al Qaeda's affiliate has taken advantage of chaotic conditions to expand its operations in recent months.

Rahman was one of al Qaeda's earliest members, joining the terrorist organization around 1989, according to Benotman. He often rubbed shoulders with Rahman during the anti-Communist jihad in Afghanistan in the early 1990s and knew him by his real first name, Jamal. (According to U.S. authorities, Rahman is also known as Jamal al-Shitaywi.)

During his student days at the Misrata College for Natural Resources, Rahman had a reputation for being a hardliner in Islamist circles, according to Benotman, causing some friction. When the Gadhafi regime cracked down on Islamists in the late 1980s Rahman left for Afghanistan, like many other Libyans, to fight holy war.

By the mid-1990s, Rahman's intellect helped him quickly climb up the al Qaeda chain of command. His religious credentials had been bolstered by a stay in Mauretania, where he undertook religious studies.

In the mid-1990s, al Qaeda entrusted him with a vital mission. According to Benotman, he was sent by al Qaeda to Algeria to explore the possibility of an al Qaeda alliance with the GIA, a jihadist group renowned for its ultra-hardline ideology then engaged in bloody civil war in the country. But the mission was a terrible failure.

According to Benotman, rather than welcoming al Qaeda's emissary, the GIA imprisoned him and three members of the Libyan Islamic Fighting Group because they considered him too moderate and objected to his criticisms of their strategy. Rahman was incarcerated by the group for eight months while the group searched for a fatwa to justify executing him, according to Benotman.

But in 1997 the Libyans escaped before such a punishment could be handed down. Rahman travelled to Turkey and then eventually back to al Qaeda's base in Afghanistan.

The experience left Rahman greatly disillusioned with the jihadist movement.

"At the time he was in huge doubt about the efficiency of jihadist groups -- he thought they needed to rethink their approach," Benotman told CNN.

In the summer of 2000, Benotnam spent several days with Rahman in the LIFG's safe house in Kabul. Sitting down for long cups of tea on the rugs in the residence, Benotman noticed that Rahman, who was always calm, courteous and soft-spoken, was in a reflective mood. For hours he discussed with Benotman what he saw as a failure of the jihadist movement to mobilize the masses. He had come to believe that some of the harsh tactics used by jihadist groups in places such as Algeria and Egypt were robbing it of popular support in the Arab world. The strident radicalism of his youth had been replaced with a mellower, more thoughtful outlook.

"He was one of the few jihadists who really impressed me with his understanding of armed conflict and how important the intellectual dimension is to this conflict," Benotman recalled.

"He was involved in defending Afghanistan and he felt that a Muslim government was being invaded," Benotman told CNN. According to Benotman, who then was in touch with Libyan jihadists in Afghanistan from London, Rahman escaped into the tribal areas of Pakistan after the fall of the Taliban. By the time al Qaeda refound its footing in 2003, he had emerged as a key operative in the terrorist group.

After Abu Musab al-Zarqawi began waging an insurgency against American troops in Iraq, Rahman was one of several al Qaeda operatives who established contact with the Jordanian terrorist, Benotman said.

In 2004, after lengthy negotiations, Zarqawi renamed his organization al Qaeda in Iraq. But Zarqawi's barbaric tactics and mass targeting of civilians soon created a backlash in the Muslim world, including within the jihadist movement itself.

During 2005, alarmed by the course of events, Zawahiri sent a letter to Zarqawi urging him to show restraint. In December of that year, when Zarqawi failed to heed such calls, Rahman sent a much more forceful letter warning Zarqawi that he was at risk of destroying the al Qaeda brand.

"Know that we like all mujahiddin, are still weak," he wrote, "we have not yet reached a level of stability. We have no alternative but not to squander any element of the foundations of strength or any helper or supporter."

Rahman during this period continued to be based for the most part in the tribal areas between Pakistan and Afghanistan.

In September 2009, Rahman, who had previously worked behind the scenes within the al Qaeda hierarchy, appeared for the first time in an al Qaeda propaganda video released to mark the anniversary of the 9/11 attacks, the first of many such appearances that saw him emerge as a spokesman for the terrorist group.

According to Benotman, Rahman saw getting out such messages as absolutely vital to al Qaeda's cause.

In recent months, Rahman had made several statements in response to the Arab Spring. Such messages have been very different in tone to previous al Qaeda statements, Benotman said.

"They are much less judgmental in tone -- he realized that aggressive messages were putting people off," Benotman told CNN. "Along with Zawahiri, he appears to recently have deliberately downplayed the group's hardline takfiri ideology for tactical purposes."

In 2010 after Shaykh Sa'id al-Masri was killed, Rahman assumed command of daily operations for the terrorist group, according to a U.S. official, before assuming the number two position.

In recent years Rahman had helped manage al Qaeda's relations with its affiliates. According to Benotman, Rahman was determined to build a more cohesive united al Qaeda global effort in which affiliated groups like al Qaeda in the Arabian Peninsula in Yemen more closely followed strategic guidance from al Qaeda's top leaders in Pakistan. In order to further this aim, Rahman relied on unique set of contacts that he had built up among other jihadist groups around the world.

In a booklet he released in the summer of 2010 al Rahman stressed the need for jihadists to open multiple fronts and for local elements to be integrated into the global jihadist movement, according to a review by the Jamestown Foundation. He also stated that takfir (the excommunication and sentencing to death of Muslims) should only be decided by religious scholars.

Rahman also concentrated on building up a support network in Iran so that the group could funnel funds and operatives through its territory, according to the U.S. Treasury Department. The Iranian government had colluded with Rahman's Iranian network, Treasury said.

According to U.S. authorities, "al Rahmam was previously appointed by Osama bin Laden to serve as an al Qaeda emissary in Iran, a position that allowed him to travel in and out of Iran with the permission of Iranian officials."

A U.S. official told CNN that Rahman's death will have an impact on al Qaeda's ties to its affiliates as well as Zawahiri's ability to gain complete control over the terrorist group.

"Atiyah was the one affiliates knew and trusted, and he spoke on behalf of both UBL and Zawahiri. He planned the details of al Qaeda operations and its propaganda. His combination of background, experience, and abilities are unique in al Qaeda -- without question, they will not be easily replaced," said the official, adding, "Zawahiri needed Atiyah's experience and connections to help manage al Qaeda. Now it will be even harder for him to consolidate control."