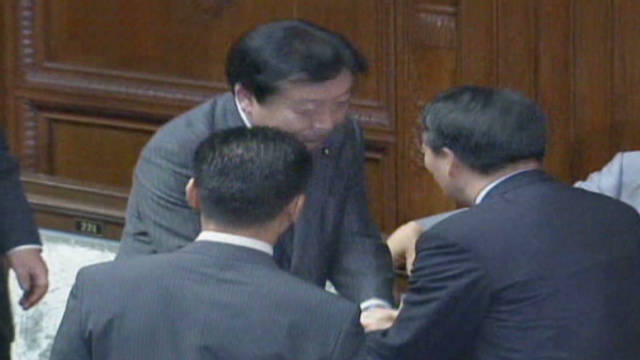 "Running Japan's government is like pushing a giant snowball up a snowy, slippery hill," he said. "In times like this, we can't say, 'I don't like this person,' or 'I don't like that person.' The snowball will slide down."

A snowball doesn't stand much chance in Japan these days. As travelers who step off at Narita International Airport immediately notice, things are toasty in Tokyo. The loss of power supply in the wake of the Fukushima nuclear disaster has the government asking businesses to cut electrical consumption by 15% and set temperatures inside public buildings like the Narita terminal at a balmy 28 degrees Celsius (82.4 degree Fahrenheit).

Beyond the heat of power problems and rebuilding from the devastating March 11 earthquake and tsunami, the 54-year old takes leadership of a nation that has been economically stuck in a decades-long malaise -- saddled with a huge public debt that's being dragged down by the world's fastest aging population and exacerbated by a strong yen, which is hurting profits of Japan's export powerhouses like Toyota and Sony.

Who is Yoshihiko Noda?

In a speech before his election as party leader on Monday, Noda compared himself to a bottom-feeding fish. "It's meaningless for weatherfish to mimic goldfish," he said.

"Like homespun weatherfish, I'll work hard for the public and move politics forward."

Noda, who was Japan's finance minister for two years, garnered only 9% support in a national poll over the weekend. Considered a fiscal hawk, he supports boosting sales tax to 10% from 5% to help reduce the nation's mounting debt.

"Although he was more like a dark horse, he is probably the realists' choice," Seijiro Takeshita, a director at Mizuho International, told CNN.

"He's a realist in the sense he wants to reactivate nuclear reactors. He's also talking about raising taxes -- he was the only person to do so -- so he's going to put some discipline into the Japanese debt problems."

What is the problem with Japanese politics?

Expectations are low that Noda, who was considered a dark horse contender as prime minister, will be the man to right Japan. He is the sixth prime minister in the world's third largest economy in just five years.

"Japanese politics is like reading Shakespeare -- you don't know whether to laugh or cry," said Takeshita.

Japan was one of the hardest hit economies by the financial crisis, due to decreasing global demand for Japanese automobiles and electronics goods. The financial problems also led to the Liberal Democratic Party being swept from power in 2009 after leading the nation for most of the past 56 years, and Noda's Democratic Party took the helm.

Yet Japan's revolving door leadership continues and Noda faces a strong fight within his own party, as well as work with the Liberal Democratic Party.

"The problems have not changed at all -- especially the intrapolitics within the DJP, and also the coalition he has to build with the LDP is the biggest obstacle that he's facing," Takeshita said.

"They've got to turn the ship around 180 degrees. Until they see an iceberg, they're not going to do it yet. They don't see one yet," Keith Henry of Asia Strategy told CNN. "The problem's going to be, let's hope they don't hit one before it's too late."

How did the earthquake and tsunami impact Noda's election?

The March 11 earthquake and tsunami triggered the world's worst nuclear crisis since Chernobyl in 1986, as cores at the Fukushima Daiichi Nuclear Power Plant overheated and spewed radioactive material into surrounding areas, causing the evacuation of more than 100,000 nearby residents. Noda is now prime minister in large part due to the outgoing prime minister's perceived mismanagement of the crisis.

Japan's 50 nuclear reactors provide 30% of the nation's power, but Tokyo residents experience something they haven't since World War II -- rolling blackouts -- after nuclear plants were shut down for inspection after the disaster.

The power problem "is hindering the quality manufacturing base of Japanese high tech industry and automobiles, so this is something he has to secure quite quickly," Takeshita said.

The former prime minister said he wanted to phase out use of nuclear power. Noda, on the other hand, was quoted as saying he wants to "regain public trust in atomic power."

Earlier this month, Japan's nuclear safety agency was placed under the control of the nation's Environment Ministry and away from the Ministry of Economy, Trade and Industry, which was perceived to have too cozy a relationship with power companies.

What economic problems does Noda face?

Japan's public debt stands at a world-topping 200% of GDP, according to the Organization for Economic Cooperation and Development (OECD). That means public debt is twice the size of the entire economy. Like a credit card user sinking deeper in debt, much of Tokyo revenues go toward paying interest on the debt rather than to reduce the total debt.

One saving grace for Japan is little of that debt is held by other nations. The U.S. government, by comparison, is the world's largest debtor country -- with $14.3 trillion in debt owed foreign investors, according to the CIA World Factbook.

"We do have this debt problem. Right now it's not blowing up because 94% of the debt is consumed within, but we have to show that direction is on the verge of changing," Takeshita said.

Of more concern to corporate Japan is the rising value of the yen, which hit post World War II record highs following the March 11 disaster.

Japanese executives say the rising yen is the greatest threat facing their companies, according to a recent survey by Nikkei Inc.

Twice as finance minister Noda interceded to try to push down the value of the yen, which decreases the amount of profits Japanese companies bring home.

What do its Asian neighbors think?

The election of Noda as prime minister has raised concerns in both Beijing and Seoul. Noda was quoted during the campaign as saying the World War II leaders buried at Tokyo's Yasukuni Shrine weren't war criminals, rankling observers in China and South Korea -- countries that Japan occupied during the war.

Visits by past Japanese prime ministers to Yasukuni Shrine, where 14 of Japan's Class-A war criminals are enshrined with thousands of Japanese soldiers, have ignited a firestorm of controversy with South Korea and China. Outgoing Prime Minister Naoto Kan did away with the annual trip to the shrine on the anniversary of the ending of World War II, but there are concerns Noda will resurrect the practice -- and the damage relations with its important neighbors.

On Monday, a commentary in Chinese state media said, "Tokyo has managed its relationship with Beijing without due respect for China's core interests and legitimate demands for development, trumpeting a 'China threat' theory for ulterior motives."

''Noda's Cabinet has to carefully craft and implement a proper policy in treating Japan's war past to soothe the resentment among the Chinese public toward Japan,'' the commentary said.

Why should the rest of the world care?

Although Japan's star has faded, the nation still is a big player in the global economy. One impact of the March 11 disaster was to show how much Japan still matters -- some parts of the automotive and high-tech industries are still recovering from the supply chain disruption from the quake.

Moreover, there are growing fears that Japan's difficulties presage problems the U.S., the UK and other leading economies face as western politicians also wrangle with growing public debt and a graying population.

"It is blatantly obvious that those comparisons are valid," Jeffrey Gundlach of U.S. fund manager DoubleLine told the Financial Times in an August 19 article entitled "West shows worrying signs of 'Japanisation.'"

"[We have] over-indebtedness and banks with bad assets that they are not writing down because otherwise they would be insolvent. Instead, you try to grind it out on a multi-year horizon."